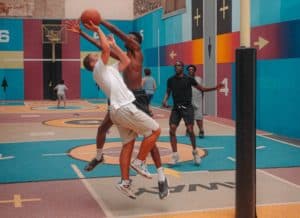 Did you ever watch the Detroit Pistons back in the late 1980s? If so, you got a great look at one of the toughest teams in NBA history. I remember being a young kid and watching the “Bad Boys” Pistons teams from 1988 to 1990.

I was in complete awe at how those Pistons teams played with reckless abandon and how they displayed a higher level of toughness than any other team in the league. Toughness, tenacity, and fearlessness were what led those Pistons teams to greatness.

Some teams can withstand the pressure of highly competitive games, playing with poise and composure, while others fall apart. Discover how to build your team’s basketball toughness through the three following drills. With the proper habits, any basketball player can increase their level of toughness.

Perhaps no play in the game of basketball exemplifies toughness more than taking a charge. A player that is willing to take a charge shows his team that he’ll sacrifice his body to help the team win. All of those “Bad Boys” Pistons players were great at taking charges, none more so than Dennis Rodman.

This charge drill will help your players develop toughness. It will also teach your team the proper way to take a charge so that they’ll avoid getting injured. Here’s a step-by-step breakdown of how the drill works.

This charge drill is a great way to start or end a practice because it boosts team morale. It gets the players used to absorbing hard contact. Despite what some people think, basketball is a full impact sport. There is an art to taking a charge and this drill allows each player to practice the proper technique.

Fighting for loose balls is the trademark of an extremely tough basketball team. This drill will help your players develop a mindset of toughness. If you work on this drill quite a bit during your practices, your players will be poised and ready to dive for a loose ball during crucial game situations.

Be sure to explain to your players that the outcome of some games is decided by one or two possessions. Getting loose balls can be a key to victory in tight games. Here’s how the drill works.

Diving for a loose ball doesn’t even hurt that much when done correctly. Reiterate to your players that the first one to the floor usually gains possession of the loose ball. This drill will help your players react quickly when they see a loose ball during games.

This is one of my favorite toughness drills because it increases toughness while also improving each player’s close-out technique, block-out technique, and rebounding skills. It’s also a great way to increase your players’ conditioning levels since it’s a full-court drill.

Legendary Michigan State head basketball coach Tom Izzo is a huge fan of this drill. It has definitely paid dividends for his teams in the past. Here’s a closer look at the War Rebounding Drill.

Most players love the War Rebounding Drill because they get to work on game situations. This drill creates a new level of fearlessness when it comes to getting offensive rebounds. Another positive aspect of this drill is that it lets each team practice their transition game, both on offense and defense.

Here’s the scoring system for the drill: