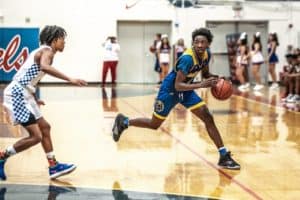 I’ll never forget the first time I watched Michael Jordan play as a young kid. Jordan seemed to dominate whoever was guarding him by clearing out the rest of his teammates and beating his opponent one-on-one. The NBC announcers marveled at how well Jordan ran the iso play.

I remember wondering what the announcers meant by iso. Maybe you have also wondered what iso means in basketball terms. The word “iso” is short slang for isolation, but what does it mean? Let’s explain the full meaning of the iso play and how it works in the game of basketball. We’ll also take a look at some of the best iso players of all time.

An iso is a type of basketball play that is run when the coach wants to “isolate” a particular matchup when his team has the ball. An iso play always involves a one-on-one matchup of an offensive player and a defender. Iso plays are a popular choice for coaches near the end of a quarter. Here’s a further breakdown of how an iso play works:

Many old-school basketball coaches used to resist running any iso plays since it puts the sole focus of the entire offense on one player. Though running too many iso plays can result in a team’s star player being called a “ball hog”, it remains a popular play in the game of basketball today. Coaches often call for an iso play when they sense that one of their best offensive players has the hot hand and can make several buckets in a row.

Who Are The Best Iso Players in The NBA?

Since there have been so many talented iso players in the NBA, let’s break down this answer into two different sections. Here are the best NBA iso players of the past and the present.

Best Iso Players of the Past

Jordan was not only the best basketball player of all time, but he was also one of the best iso players the world has ever seen. Bulls head coach Phil Jackson always knew to call an iso play for Jordan when the game was on the line. Just look how Jordan dominates poor Bryon Russell in the above video.

This is a great example of the iso play working to perfection. It’s hard not to feel a little bit sorry for Russell since he never had a chance against Jordan’s sick moves!

Iverson was known as the King of the Crossover move and with good reason. Check out this video that features an iso play of Iverson going one-on-one with Jordan. Notice how lightning-fast Iverson was at handling the basketball.

The 76ers offense back in the day ran a ton of iso plays with Iverson at point guard. Though he was barely six-foot-tall, Iverson never backed down from any player on the court. Iverson was inducted into the Naismith Memorial Basketball Hall of Fame in 2016 and is one of the best iso players in NBA history.

This three-minute video is jam-packed with some of Bryant’s best-ever iso plays! Just like he did when he coached Jordan, Phil Jackson knew to give the ball to Kobe during clutch moments. The Lakers won five NBA championships during Bryant’s 20-year tenure.

Bryant’s crossover move wasn’t quite as quick as Iverson’s but he could nail jumpers over any defender no matter how tall they were. Shaq was a definite force down low during the Lakers dynasty, but the team’s go-to play when they desperately needed a basket was an iso play for Kobe.

King James could also be known as the king of isolation plays. The above video shows how James beats several top-level defenders with his famous fade-away jump shot. Since he’s 6-9, James is able to shoot over almost any defender with ease.

Doncic may only be 22-years old, but he’s already one of the best iso players in the game today. The 6-7 Slovenian is a versatile player who can punish defenders by taking them off the dribble or by nailing a three-point shot right in their face. What’s scary about Doncic is that he is still improving as a basketball player. The sky’s the limit for this kid!

Harden is a dynamic isolation player who can take over a basketball game any time he gets the hot hand. The 31-year old routinely devastates defenders with his signature step-back three-pointers. Harden is also able to perform the crossover dribble and hard pump fake to perfection.

How You Can Become a Better Iso Player

Since isolation plays are such an integral part of the game today, it’s in your best interest to make yourself the best iso player possible. Here are a few key areas to focus on to improve your isolation game.

1. Get Stronger: Train with weights during the off-season to improve the overall strength of your body’s major muscle groups. The added strength will help when you need to post up your opponent during an iso play. Use those strong glute and leg muscles to create a little extra separation. This will give you a clearer jump shot.

2. Train for Explosiveness: Consider doing plyometric drills to increase your explosiveness with the ball in your hands. Plyometrics will help train your fast-twitch muscle fibers to react more quickly. This will enable you to perform the crossover move more explosively and keep the defender off balance.

3. Do Ball Handling Drills: Improving your ball handling is one of the fastest ways to become a better iso player. Practice crossovers, between the legs dribbles, and dribbling the ball while low to the ground. Also, work at dribbling the ball behind your back to really confuse and frustrate the defender.

4. Play More 1-on-1: The best way to improve at any basketball skill is to practice that skill at game speed. Playing lots of one-on-one will help to fully develop your iso skills. The best iso players in the NBA got to that level by playing countless hours of one-on-one.