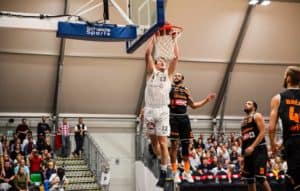 I’ll never forget the first time I watched the great Earvin “Magic” Johnson play on TV. Johnson was one of the greatest fast break players in NBA history and revolutionized the art of taking the ball from coast to coast. As a young kid, I remember wishing that I could run the fast break just like Magic.

The goal of this article is to teach you how to run the fast break more efficiently. To score more off fast breaks, you have to develop a successful transition attack. Here are four basketball drills that will help you transition into your offense faster and score some easy baskets, including a video demonstration of each.

This transition drill is perfect for basketball coaches that want to teach their players how to properly space out during a fast break. The San Antonio drill stresses the importance of efficient dribbling, and the frenetic pace helps players get into better shape. No defenders are required to run this transition drill.

After inbounding the ball, three offensive players run the full length of the floor. The ball handler stays in the middle of the court while the other two players sprint down opposite sides. Only three to five dribbles are allowed, which teaches speed dribbling, and efficiency.

The ball handler makes a nice, crisp bounce pass to one of the players just before he gets to the basket. Once he catches the pass, the player will shoot an easy layup. Both of his teammates will crash the boards to get in position for an offensive rebound.

The San Antonio is an effective transition drill because it teaches proper passing skills, communication, and conditioning. The drill is also fun because the team can see how many layups in a row they can make.

Alabama Crimson Tide coach Nate Oats is a big proponent of this transition drill called Texas 121. The drill involves two offensive players and one defensive player for a 2-on-1 fast break. Here’s a breakdown of how it works:

The Texas 121 is a fantastic drill because it allows each player to work on their transition skills, both on the offensive and defensive ends. The goal is for the shooter to make an easy fast-break basket and then prevent a fast-break basket on defense.

Split your team up into groups of five players each and have them line up on the baseline. Once the coach blows the whistle, all five players will immediately go into their transition offense. The coach can set stipulations such as no dribbles allowed or a minimum of three passes before any player can shoot.

Once the ball reaches the baseline, the next group of five players starts the drill. The coach will award each group with anywhere from 1 to 3 points. The amount of points given is determined by intensity, hustle, and execution.

The Pride Drill is a fabulous drill to do at the end of practice instead of the dreaded suicides that most teams run. To be an elite-level transition team, each player has to be in phenomenal cardiovascular condition. This drill accomplishes that while also building the team’s familiarity with the transition offense.

The 3-on-2 full-court drill is another great way for your team to work on transition offense and defense while having a friendly little competition. Divide your team into two separate teams. To start, have three offensive players from Team A line up at the half-court line. Have two defensive players from Team B line up, with one at the foul line and one almost underneath the basket.

Once the coach blows the whistle, Team A starts the fast-break and tries to score as quickly as possible. After five seconds, the coach will again blow the whistle and Team B can add a third defensive player to the mix. Now, the drill will be 3-on-3 until a basket is made or the defense gets the rebound.

If a basket is made, Team A switches into a press defense with two players. Team B will have to inbound the ball and try to break the press. Once the press is broken, Team B will set up their fast-break offense against two defenders on the opposite end.

The drill can go on for as long as the coach wants and players from each team should be rotated in and out. The best thing to do is to end the drill as soon as one team reaches a certain number of points. Once that happens, the losing team has to do some extra conditioning like pushups, situps, or sprints.