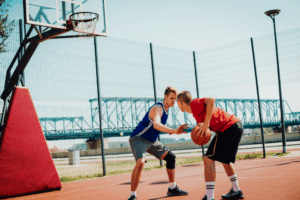 Have you ever heard of the phrase “offense wins games, but defense wins championships?”

When it comes to the game of basketball, that saying is the absolute truth. Playing tough defense may not be as sexy or as fun as playing offense, but it’s a major key to building a basketball dynasty.

Getting a key defensive stop in the closing minutes of a tight game can be the difference between a win and a loss. If your team needs help building a championship defense, this article is for you. Use these two basketball defensive drills to train your players to defend like a pro.

We’ve also included a video demonstration of each drill to further help you better run them with your team.

What is a Closeout?

A closeout is a popular defensive maneuver that is used to shut down a good offensive player. It’s called a closeout because the goal of the defender is to “close the gap” of space between himself and the offensive player. The two main purposes of a closeout are to prevent a wide-open jump shot and eliminate the ability to drive toward the basket.

A fundamentally sound closeout technique is executed when a defensive player gets as close as possible to the offensive player. The defensive player will want to keep his steps short and choppy and keep his hands held high at all times. The choppy steps make it difficult for the ball handler to drive the lanes and the high hands prevent open looks at the hoop.

2 Essential Closeout Drills to Help Your Team Improve Their Defense

This great drill was made famous by former University of Arizona head coach Sean Miller. Miller was named PAC-12 Coach of the Year three times and a big believer in playing good closeout defense.

The goal of the drill is for the defensive players to practice taking away open jump shots and inhibiting the vision of the offensive players. Here’s how the drill works:

The 2-on-2 closeout drill from Championship Productions is another fantastic way for players to practice closeouts. It’s also a solid way for players to work on their man defense as well. This drill will also help improve your players’ offensive skills by teaching them how to pass against a closeout.

The main goal of the 2-on-2 closeout drill is to allow each player to work on their closeout technique. It will also allow your players to practice guarding passing lanes. Here’s a breakdown of the drill: