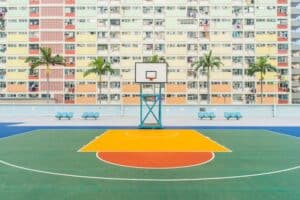 Did you know that the Memphis Grizzlies are currently averaging 58 points in the paint per game for the 2021-22 NBA season? That leads the NBA and is a big reason why the Grizzlies are poised to make a deep playoff run. Memphis just seems to have a knack for getting open shots near the basket.

If you’re new to the game of basketball, you may not know what “the paint” is. In this post, we’ll explain what the paint is and go into detail about all the different rules surrounding it.

What is The Paint in Basketball?

The paint is the rectangular area underneath the basket that stretches from the end line to the free-throw line. It is usually a different color from the rest of the basketball court.

Different Parts of The Paint to Know

The paint also has different designated parts to it. Let’s go over each part of the paint as well as some details about each.

Most folks are familiar with the free-throw line. It’s where a player shoots the ball after being fouled during the act of shooting.

Are you familiar with the top block up near the foul line? It’s referred to as the high post. Both small forwards and power forwards usually spend a lot of time near the high post.

Lots of teams like to set screens up near the high post. They often do this to try to give the ball handler a clear lane to drive to the hoop.

The area in between the first block and the second block is called the low post. This is where the big fellas (centers and power forwards) hang out.

A lot of times, defenses will try to double team a dominant paint player if he catches the ball in the low post. Most defenses would rather give up an open look at a three-point shot than an easy layup underneath the basket.

The block is the area between the end line and the first block. This is where lots of points are scored and rebounds are gathered.

When you hear someone say, “that player dominates the block”, it means he’s a very good scorer down low or a dominant shot-blocker on defense. A highly skilled center can take over a basketball game.

Top of the Key

The top of the key isn’t considered part of the paint, but it’s so close to it that we’ll include it in this overview. It’s the area that is just above the free-throw line and just short of the three-point line.

When you look at an outline of a basketball court, this area kind of has a keyhole shape to it. For example, you may hear some basketball announcers on TV say that “Kevin Durant shoots the ball well from the top of the key.”

On most teams, the top of the key is where the team’s best point guard will dribble and give instructions to his teammates as to what play to run.

Rules for The Paint

Since the paint is the busiest spot on the basketball court, there are lots of rules governing it. Let’s take a look at each rule and why it’s important.

Back in the day, teams would just tell their taller players to simply stay underneath the basket and wait to be thrown the ball. While this simple strategy worked wonders, it gave an unfair advantage to teams with larger players.

To combat this, basketball instituted a three-second rule. It states that no offensive player can be in the paint for longer than three consecutive seconds. If a player is caught violating this rule, the team on offense has to surrender possession of the ball to the team on defense (turnover).

The NBA also has a defensive three-second violation. This simply means that no defensive player can just stay camped out in the paint unless he is actively guarding an opposing player. This rule led to more scoring and more excitement for the fans.

If a defender is called for a three-second violation (also known as illegal defense), it’s considered a technical foul. The offense will be given one free throw and will be able to keep possession of the ball.

Oddly enough, there is no defensive three-second rule in college basketball. This is why you see most teams play zone defense in the NCAA. They do still instill the three-seconds rule for offensive players, however.

This isn’t called very frequently but it’s in the rule book so we’ll discuss it here. When a player is shooting free throw shots, each team will line players up in between each block outside the paint.

If an offensive player jumps into the free throw lane before his teammate releases the ball, the referee will call a lane violation and that free throw attempt will be forfeited (even if the shot is made).

If a defensive player cuts into the foul lane before the shooter releases the ball, the offensive player is awarded an extra free throw.

Strategies Players Use in The Paint

Since the paint is where players can get high percentage shots, most coaches have specific strategies for calling plays in the paint. Here are some of the most popular paint strategies in the game today.

This may be the most basic strategy in basketball, but it’s still highly effective if you have a post player that is a gifted scorer. Posting up is where a player uses his back, shoulders, and butt to get in a good position near the paint.

Once the offensive player has posted up the defensive player, the ball handler will pass him the ball. Since he is catching the ball near the paint, he’ll have an opportunity for an easy field goal.

Here’s another paint strategy that has been around for quite a few decades. When one of the guards has the ball, a post player comes up and sets a pick (screen) on the defender that is guarding him.

After that, the post player quickly cuts to the basket. The guard then passes him the ball and he should have a wide-open layup.

This strategy was invented by Vance Walberg when he was coaching high school basketball in California. He perfected this type of offense while coaching Pepperdine and later passed it on to John Calipari, who still uses it at the University of Kentucky. Here’s a brief look at how it works:

The reason the dribble drive motion offense is so successful is that it constantly forces the ball into or near the paint. This creates lots of high percentage shots and usually some easy buckets. This type of offense is incredibly difficult to defend, even for teams that play fundamentally sound defense.

This is one of the most popular defensive schemes in junior high, high school, and college basketball. The reason it’s used by so many teams is that it’s incredibly effective at limiting points in the paint.

If a team is running a 2-3 zone defense, two guards will be positioned up near the foul line. The two forwards and center will all be positioned near the basket. As we discussed earlier, you won’t see this type of defense in the NBA because of the defensive three-second rule.