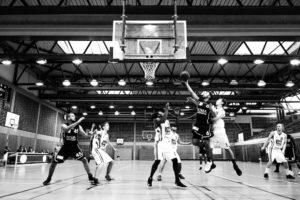 My mind always goes back to that high school basketball game when we caused four consecutive turnovers with our press defense en route to a 12-point comeback late in the second half. For that reason, I always emphasize practicing full court drills.

Full court drills help with offense, defense, ball handling, quick decision making, and conditioning up and down the court.

Here are some of the best offensive and defensive full court basketball drills.

Breakdown of the drill:

This drill from Breakthrough Basketball begins with Annie Over with the five offensive players at one basket while three defenders wait at the opposing end. Annie Over is followed by a five on three fast break.

The two defenders who are not on the defensive end start the drill on the sideline at half court.

Once the offense brings the ball past half court, the two remaining defenders run from the sideline to meet at the jump circle at midcourt. After meeting there, those two defenders join their three teammates, as the offense attempts to score quickly on the fast break.

With the 5 on 3 + 2 fast break and transition drill, the offense has to take advantage of short-lived fast break situations. With a two-person advantage and momentum, the ball movement should be quick and efficient to allow for a quick bucket.

This is a great drill for an offense that needs to improve in the fast break, as the ball handler needs to find the open player or players.

Breakdown of the drill:

Next up on this list of important full court drills is from Coach’s Clipboard, and it’s from Nebraska Cornhusker head coach and former NBA player Fred Hoiberg.

The basketball drill instructions are as follows: from the opposing hoop’s foul line, offensive player #1 (O1) outlets to O2, who is moving up the right side of the court.

O2 chest passes to O3, who finishes with a left-handed lay up. O4 rebounds the lay up and sends a pass to P5, who sprints up the court towards the other basket from the same side O2 came from.

By the time P5 has received the outlet pass from O4, O2 has made his or her way downcourt to gather a pass from P5 for a right-handed lay up. O1 is the rebounder, and O4 moves into the outlet spot to receive the pass from O1, as the drill continues to flow.

With 28 made lay ups in two minutes being the goal according to Hoiberg, accurate and efficient passing is the name of the game. Players do not have any reason to dribble in this drill, as they attempt to pass as quickly as possible and to focus on making one lay up almost every four seconds.

This full court drill is all about teamwork and if players can find their teammates with crisp passes, this can help with the team’s transition offense and prevent bad passing.

The Z-Drill is a defensive drill that allows for a team to practice defense with or without an opposing offensive player.

Beginning on the left baseline, the first defender (followed by the second defender, third defender, and on) will begin sliding diagonally toward the top of the free throw circle, where is the location of the first cone.

There are three different types of the drill:

1. Defensive Sliding: This is the aforementioned sliding from one cone to another.

2. Defensive Sliding and Sprints: This variation is the alternation of sliding and sprinting from one cone to another.

These types of defensive instincts are vital for defenders to learn. They are basic, but they allow for improvement of conditioning and transition defense.

This defensive drill is relatively simple as well, as it involves just five players, and only four of them begin on the court.

According to the video clip below, offensive player #2 (O2; red in video) and O3 begin on defense as they chase down defensive player #2 (D2; blue), who is dribbling the basketball from the free throw line to half court.

Either O2 or O3 tips the basketball to D1, who is waiting at the opposite free throw line. D1 then passes to O1, begins the fast break with O2 and O3 against D1 and D2.

Defensive hustle is important, and in this drill, D2 has to fend off a 3 on 1 + 1 fast break. There are plenty of opportunities for the offense to take advantage of the one defender, but with D1 running back on defense, there is a potential for a deflection or steal by the defense.

Understanding how to deal with such a defensive disadvantage is necessary for a defender because it is inevitable that players will be in similar situations during games.