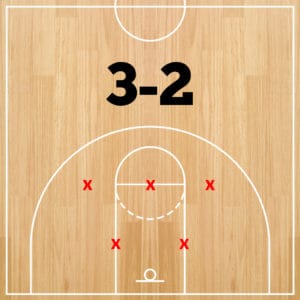 When I began my basketball playing career, I started by playing man-to-man defense – as do most people. However, zone defense has many advantages and should be a part of introductory learning of the game of basketball.

Zone defenses are important for limiting fouls, hiding weaker defenders, and preventing player fatigue. When choosing your specific zone defense to play, there are many attributes to consider.

The 3-2 zone allows for strong coverage of the high and low posts in addition to helping with rebounding. The only caveat about the 3-2 zone is that there is no ball pressure on the offensive point guard.

With that, here is everything you need to know about the 3-2 zone defense.

The 3-2 zone has three defenders in a horizontal line, with two wing defenders and another defender at the middle of the free throw line or 3-point line (left to right: D2, D3, and D1). Meanwhile, the two back defenders (left to right: D4 and D5) begin close to the basket near the edge of each side of the paint.

Basketball Moves to the Wing

Let us set the stage with the three offensive guards (left to right: O3, O1, and O2) on the three-point arc with the point guard (O1) at the top of the key while the other two (O2 and O3) are in position for the above-the-break 3-pointer. The center (O5) is at the free throw line area, and the power forward (O4) plays on the low right-sided block.

The point guard (O1) passes to one of the above-the-break guards (O2), and here is how the defense should react: D1 moves to the player with the ball, the weak side guard (D2) moves from the weak-side wing to halfway between the high and low posts on the weak side, and the power forward (D4) moves to the hoop.

In general, everyone moves closer to the ball, and the off-the-ball strong side defenders (D3 and D5) deny passes to O4 and O5 with D1 guarding O2 on the ball-side wing.

Basketball Moves to the Corner

Now if O1 makes his or her way to the ball-side corner with O2 above the break on the ball side, D1 “falls into the gap” to allow for a reversal pass and prevent dribble penetration. By sagging, D1 allows the zone to pack in and have D1, D3, D4, and D5 playing defense on the strong side.

D5 has moved to the corner to guard O1, and D1’s position prevents O1 from passing to O4 and O5. D3 guards O5 at the free throw line, while D2 is on the weak side of the restricted area to provide help defense if necessary. D2 is still in position to jump out to guard O3 on the weak side if a skip pass is executed.

How to Trap the Corner

When the ball moves to the corner, there is the option for D1 to join D5 on the ball. By trapping O1 in the corner, the zone defense can work to perfection. If the trap is well-executed, then a turnover is probable.

With D1 and D5 in the corner, D2 and D3 have moved closer to the basket. D2 is close to the middle of the paint while D3 is in a similar position as when D1 was falling into the gap.

If O1 passes to O4 in the low post, then the defensive positions remain practically the same as when the basketball was in the corner with O1. The main exception is D1 guarding O2 closely to avoid a pass out from O4 to O2 for an open shot.

The paint defenders – D4 on O4, D3 on O5, and D2 on the weak-side post – are packing the paint to avoid an easy two-point shot, and D3 has moved closer to the low post, but can still deny a pass to O5.

If O5 has the ball at the high post area, D3 guards the ball. The defensive positions are now a 3-2 zone with every defender in or near the paint. From left to right, D2, D3, and D1 are close to being in a horizontal line.

D4 and D5 are found on the low blocks, as D5 guards O4. Unfortunately, in this defensive set, D1 and D2 are playing off of O2 and O3, respectively.

If you’re more of a visual learner, this video shows you the movements of top three players in the 3-2 zone:

What is The Purpose of a 3-2 Zone Defense?

The 3-2 zone defense can stop the opposing team from making outside shots, but it typically is trying to confuse the offense. At the same time, it can keep the defensive players well-rested in comparison to playing man-to-man defense.

Falling into the gap allows for reversal passes, so defensive teammates must be strong in communication skills to avoid the offense from moving the ball quickly enough to get an open shot.

When Do Teams Typically Implement a 3-2 Zone Defense?

The 3-2 zone defense can be used when the opposing team has strong outside shooters as well as when the opposition has offensively challenged big men.

Although there are times in which the 3-2 zone defense leaves outside shooters open, adaptations can be made to allow the zone defenders to jump out to certain shooters. The ability to trap certain “zones” of the court is also an important aspect of the defense to cause turnovers.

Other Types of Zone Defenses

The 2-3 zone is the most popular choice for coaches when implementing a zone on defense. Unlike the 3-2 defense, the three-point line is not as well covered in the 2-3 defense.

The main reason to use the 2-3 zone is to prevent the offense from dribble penetration and force an abundance of outside shots.

The 1-2-2 zone allows for a strong defense against impressive shooting teams and at the same time, the defensive positions give the team opportunities to trap the offense.

Another strong aspect of the 1-2-2 is the ability to transition to a quick and efficient fast break on the other end of the court. This defense is unable to guard the high post well and rebounding can be an issue.

With the 1-3-1 zone defense, the defenders may be the most well-rested because they do not have to move as much as in the other defenses.

This zone is versatile and can protect the middle of the court, but corner 3-pointers are tough to defend with it.

Now this is a type of zone defense that can be sure to confuse the opponent, as one defender plays the top of the key, another plays at the foul line, and the three remaining defenders are lower than the foul line.

Rotations and quickness are both important for this zone.

For teams ready for an advanced type of zone, the match up zone is for you. Coaches can make a match up zone into whatever they would like, as it is a cross between man-to-man and a zone.

There are rules designed by the coach to make sure the defense can dictate what the offense can do. The match up zone can morph throughout the game so the offense does not know what is coming next.

Another defensive zone that mimics the man-to-man defense is the amoeba, which sets up with a 1-1-2-1 formation.

Steals and fast breaks are the name of the game for this zone, as it is a risky one that causes turnovers, but it can also lead to easy baskets against you.

Finally, let’s cover the list of defenses other than a zone setup…

Man-to-man, the opposite of the prototypical zone defense, is a defense in which each player is matched up on defense against an opposing player.

If there is a star offensive player – usually a shooting guard or small forward – that needs special coverage, the defense will employ a diamond & one in which one player is playing man-to-man while the others are forming a diamond.

The top defender is at the middle of the three-point arc.

Similar to the diamond & one, the box & one is for that one impressive offensive player, which can be a point guard. The box formation is dictated by the four corners of the restricted area.

For teams with two strong offensive players, the triangle & two could be for you.

The low post defenders are in the same spots as the box & one while the top defender is near the middle of the free throw line.