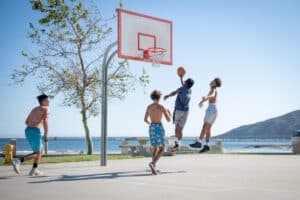 One advantage basketball has over other sports is the ease in which a game can come together. Rounding up a few friends for a pick-up game, also perhaps involving other hoops fanatics can lead to hours of fun in a schoolyard or city park.

Since these matchups are pretty informal, it’s highly unlikely that players are coming on to the court with coordinated shirts or NBA jerseys ready to wear. Whatever’s not in the laundry that day is what folks bring to the court.

However, this potential lack of clothing distinction can negatively affect the game. Luckily, shirts vs skins exists as an ideal solution to help spot teammates in a pinch.

What Shirts vs Skins Means In Basketball

Shirts vs skins is one of the simplest ways to identify team affiliations in an intramural sports setting, physical education class or impromptu run. As the name suggests, one team will be wearing shirts during the game, and other team will play without shirts.

Shirts vs skins is more commonly used by males than females.

Why People Play Shirts vs Skins

The reasoning behind clearly distinguishing the two teams is pretty apparent to the most novice of basketball players, but let’s think about more practical reasons why this is important, and why this method has withstood the test of time.

Relative to the other players on the court, there are any number of combinations involving the hue and style of shirts. Everyone could wear a different colored top, or you might have multiple players with the same colored shirt.

Similarity or difference in wardrobe can cause confusion when the game gets tight and players act on instinct. For example, if you’re on a team with a player that has a blue shirt, and there’s an opponent also donning a blue shirt, the odds of an embarrassing turnover increase.

If the player wearing the blue shirt on defense pretends to be on offense, and sells the deception by cutting to the basket with their hands in the air, they might actually end up with a cheap steal. Not wanting to pass up the chance for an easy layup, the ballhandler might fire the ball into the blue blur’s direction, only realizing what had happened after it was too late.

Additionally, most people play more than one game when getting together. Teams can change if new captains are selected, players are swapped for one another in hopes of a closer matchup, or participants shoot for teams to switch things up.

As a result, it’s highly likely that players will have a variety of teammates throughout their pick-up session, which underscores the need for consistent demarcation.

Shirts vs skins alleviates that concern on the spot. In addition to being an immediate solution, it’s also completely free, which is always an added bonus.

When People Play Shirts vs Skins

Any time there’s an enhanced possibility that a mistake could be made because players can’t properly detect who they’re playing with, the prospect that shirts vs skins can save the day increases. We’ve gone through some of the scenarios in which players might want to deploy it to make life easier, but there are also certain locations that are inherently more appropriate for it.

While we’re all about implementing ways to help optimize game play, it’s never at the expense of a person’s well being. Do not play shirts and skins during a chilly day or night—catching a cold or worse for no reason might keep you on the sidelines needlessly.

The opposite side of that spectrum would address pickup games being played during the spring or summer, or during a warm day in general. You might actually be surprised at how many players volunteer to be skins during these days, as many athletes do not love the idea of a sweaty shirt stuck to their torso.

Shirts and skins can also be played year-round in an indoor court or gymnasium, with the above temperature considerations inside the facility kept in mind.

Alternatives To Playing Shirts vs Skins

While shirts vs skins would seem to solve a lot of issues, we need to consider that it might not be the most popular option for some participants in the game.

Rather than spending time trying to convince another player to go skins (thereby delaying the start of the game), think about a couple of other methods to separate teams in the absence of uniforms.

Pinnies have long been a favored selection of determining team A from team B. They’re usually pretty affordable, and are essentially loose fitting basic jerseys that can be worn over your shirt.

Another alternative could be to have headbands available during the game—one team could wear them while the other doesn’t.