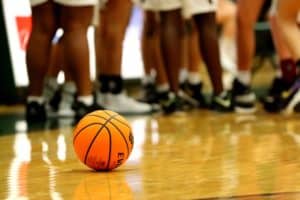 During my basketball career, I always played the power forward position. I remember posting up down low in the paint and calling for the ball when out of nowhere the ref blew the whistle and charged me with a three-second violation! Being new to the game of basketball, I had no idea what that meant but my coach certainly told me (quite loudly I might add) during the next timeout!

In basketball, both offensive and defensive players are allowed to be in the paint (also known as the 16-foot lane, key, or free throw lane) near the basket. However, players cannot stay in the paint for longer than three seconds in a row.

The purpose of the three-second violation is to make players stay on the move instead of simply standing underneath the basket all the time. The rule was created to keep any player from having an unfair advantage when it comes to rebounding. Another purpose of the rule is to make the game more exciting and fun for the fans.

Defenders can’t be in the paint for more than three seconds in a row unless they are actively guarding an offensive player. This rule was put in place to give the offense a fair opportunity to get close to the basket.

If a defensive player is charged with a three-second violation, it’s considered a technical foul and will result in one free throw attempt plus possession of the ball. This is the type of call that can swing the momentum of a game in a big way!

Why Does The NBA Have This 3 Second Rule?

Did you know that the NBA hasn’t always had the defensive three-second rule? The NBA didn’t start using the rule until 2001 when the league office instilled it to try to make the game more exciting and more appealing to the average fan.

The NBA also wanted to improve the flow of the game, increase scoring, and improve the overall watchability of the game. If you used to watch NBA games back in the 1980s or 1990s, you probably remember lots of big post players just hanging out near the basket while on defense. This was a big reason why scoring was much less back in that era.

The NBA’s goal was to make the big post players move out of the paint so that the guards could drive to the basket more freely. Many NBA gurus believe that the rule was put in place because of Shaquille O’Neal’s dominating presence underneath the basket.

Leave it to a larger-than-life personality like Shaq to forever change the NBA rulebook (haha)! This was basically the death of the zone defense in the NBA, even though the rulebook doesn’t deem it as officially illegal.