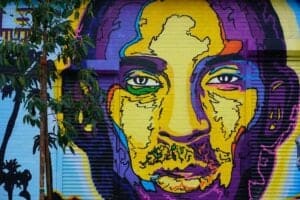 Some of the greatest basketball players of all time didn’t exactly have luscious heads of hair.

This might have helped make them more aerodynamic on the fast break, or more focused on their craft instead of their looks.

Whatever the case may be, a bald head or a shaved head has been a ticket to legend status over the course of NBA history, and we’ll take a look at some of the best to ever do it in the past and in the present.

There wasn’t any way defenders could slow down his sky hook shot, which is arguably the singular most potent move in NBA history.

Abdul-Jabbar played for the Milwaukee Bucks and the Los Angeles Lakers, and won six NBA titles. He made the All-Star team 19 times in an illustrious 20 year career.

While he wasn’t quite the hairless domed gentleman that Abdul-Jabbar was, Nate Thurmond had most of his head uncovered for the fans to see during his NBA career.

While he isn’t a name that immediately comes to mind in the annals of league history, he was a tremendous player and a Naismith Basketball Memorial Hall Of Famer.

During his time with the San Francisco/Golden State Warriors, Chicago Bulls and Cleveland Cavaliers, Thurmond averaged exactly 15 points and 15 rebounds. A potent scorer in the paint and a rugged rebounder defined his style of play.

He probably has the coolest name on our list, but don’t let that take away from his accomplishments on the floor. World B. Free (born Lloyd Bernard Free), was a 6’2” guard who was not afraid to do whatever it took to get a bucket.

It is fun to imagine what his career would’ve been like had he been born in the modern era, but Free still averaged over 20 points per game in his 13 NBA seasons. Like Thurmond, Free wasn’t fully devoid of hair, but a noticeable receding hairline.

Fans are still able to see his bald head on TV, but younger enthusiasts of the game might not realize just how incredible of a player Charles Barkley was.

His most accomplished years came in the 1990’s on the Dream Team and leading the Phoenix Suns to the NBA Finals in 1993, but was an athletic force when he first entered the league in 1984.

Under the tutelage of distinguished veterans like Julius Erving, Barkley made a major impact with the Philadelphia 76ers early in his career. During his time in Philadelphia, he averaged over 23 points and 11 rebounds per game.

As one half of what is considered to be the most lethal pick and roll combination in NBA history, Karl Malone’s place on this list was pretty secure.

While his place in NBA history is often linked to the shortcomings in the 1997 and 1998 NBA Finals, Malone was a force to be reckoned with right from the very beginning.

Even when he wasn’t being spoon fed by point guard John Stockton, Malone’s physical presence and emerging jump shot gave defenders headaches. The Mailman, as he was known, could be counted on to deliver night in and night out.

He made 14 All-Star teams and averaged 25 points a game in his career.

Compared to some of the other resumes on this list, Byron Scott’s may statistically come up a bit short. He didn’t made any All-Star teams, and is not yet in the Hall of Fame.

However, his contribution and presence on some iconic Los Angeles Lakers teams cannot be denied. Scott played strong perimeter defense, and was a reliable jump shooting option when his star teammates were hounded.

He won 3 NBA titles during his time in Los Angeles.

Any list ranking the greatest to ever play the game of basketball has to include Michael Jordan, and this rundown of elite bald players is certainly no exception. There is perhaps no basketball player or athlete on the planet who has done more for the look than the former Chicago Bulls star.

Winning the NBA championship 6 times, while not once losing in the NBA Finals will help achieve that.

In addition to being a 14 time All-Star, a lockdown defender and an unparalleled competitor, Jordan was also the brand ambassador for a league looking to put its stamp on society.

One of the greatest shooters of all time navigated around screens on the baseline with gusto. Indiana Pacers guard Reggie Miller never met a shot he didn’t like, and worked extremely hard to get open for quality looks.

When he retired in 2005, he had converted the most three pointers in NBA history, with 2,560. He is still a fixture with the league, on TNT’s in-game broadcasts.

For a point guard, one of the most difficult chores in the 1990’s was bringing the ball up against Seattle SuperSonics defensive ace Gary Payton. He was not afraid to play physically, or tell you about how he was going to shut you down.

The former 2nd overall pick would end up making the All-Defensive Team nine times in his career, inclusive of his Defensive Player Of The Year award win in the 1995-1996 season.

Shaquille O’Neal had some phenomenal individual campaigns in the 1990’s, but his teams started to turn the corner in the 2000’s.

He was the catalyst of the Los Angeles Lakers dynasty in the early part of that decade, as they won 3 consecutive titles.

He would take his talents back to Florida in the middle part of the decade as a large (literally) reason why the Miami Heat won their first NBA title in the 2005-2006 season.

There were few players in the modern era of the league who were more intense than Kevin Garnett. There wasn’t anything more important to Garnett than winning, and he let all of his teammates know about it throughout his career.

While his best statistical seasons came with the Minnesota Timberwolves, he proved to be the inspiration for a Boston Celtics team that won the NBA championship in 2008, cementing his legacy as a winner.

Earlier in his career, Jason Kidd rocked a dyed blonde hairstyle. However, his best campaigns came with a shaved head or completely bald noggin. He brought the New Jersey Nets to the NBA Finals in back to back seasons, setting up athletic teammates on the fast break.

Kidd would end up winning an NBA title much later in his career with the Dallas Mavericks, as part of a true team that worked together to stymie other stars in their prime.

Kobe Bryant was a phenomenal player in the 2000’s, but only really embraced the bald look in the final decade of his career.

By this juncture of his career, he was primarily finished winning titles, but was still on a rampage from a scoring perspective.

Perhaps his most memorable moments as a clean-shaven player came in his final game, where he scored 60 points against the Utah Jazz. The 5 time NBA champion was a problem regardless of how he looked, that much was certain.

In the early part of his career, Russell Westbrook was not exactly sporting a lot in the follicle department.

While in college at UCLA, and in his first few years in the league with the Oklahoma City Thunder, Westbrook appeared to be getting haircuts pretty regularly.

He would attack the rim with reckless abandon, often finishing plays with rim-rattling dunks. He will be known as a jack of all trades, who could pass, score and rebound as well as any point guard.

During his younger days with the Milwaukee Bucks, Ray Allen kept his hairstyle pretty short, but perhaps just above the level relevant to qualify for a list of the follicle-ly challenged or dismissive.

However, Allen really leaned into the bald look later in his career. By the time he joined the Seattle SuperSonics, and then experienced team success with the Boston Celtics and Miami Heat, fans could not find a hair on his head.

For many years, the hairline of LeBron James has been something of a running topic.

However, as his career enters its latter stages, James has embraced the bald dome, and made up for hair elsewhere on his face with his beard.

Despite an unheralded entrance into the NBA, Milwaukee Bucks guard Khris Middleton has become one of the most talented scorers in the league.

The Bucks found out the hard way how much Middleton meant to the team, as his absence dearly cost Milwaukee a chance at repeating as NBA champions last season.

New York Knicks guard Evan Fournier has provided a scoring punch wherever he has been. He has spent the majority of his career with the Orlando Magic, where he averaged over 16 points per game.

He continues to be a mainstay for the French national team as well.

Even at the advanced age of 37, P.J. Tucker is known as one of the most effective defenders in the NBA today.

Winning teams know how important his contributions are, which is why the Philadelphia 76ers signed him away from the Miami Heat this offseason.

Speaking of accomplished perimeter stoppers, Alex Caruso of the Chicago Bulls is on the shortlist of premier on ball defenders.

His play with the Los Angeles Lakers was a factor in their 2020 NBA title victory, and continues to be a menace for anyone that goes against him.