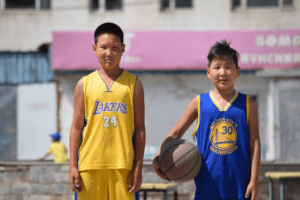 As basketball has evolved in the modern era, those of us who are vertically challenged doesn’t always need to crane our necks anymore. While there are still a few towering centers out there in the NBA, the league has moved towards athleticism and versatility displayed by shorter players.

The average NBA player height has remained consistent at 6’6” for the last 33 years, but the NBA average height of a center has dropped an inch in the last 15 years.

Despite their lack of height, let’s take a look at smaller centers that are getting the job done now, and who have excelled in previous eras of the league.

Who Is Currently The Shortest NBA Center?

As it stands now, Montrezl Harrell of the Philadelphia 76ers is the league’s shortest true center. Despite standing only 6’7” tall, he has carved out a solid career as a scorer off the bench.

He’s only started 29 games in his NBA tenure but still has averaged over 21 minutes per game.

Fans might be wondering why the 6’6” Draymond Green isn’t listed as the answer here. The Warriors have elected to play Kevon Looney a lot more at center in the last couple of years, and figure to feature James Wiseman prominently this season.

Spoiler alert: We still may see Green as part of this listicle.

Ranking The 10 Shortest NBA Centers Of All Time

Bio: His jersey won’t hang in the rafters of any esteemed basketball place of worship, but for many, Chuck Hayes’ insertion into the lineup as a full-time center changed the way a lot of people think about basketball.

The Houston Rockets couldn’t have deployed a more stark approach in 2009-2010 than in prior campaigns. 7’6” Yao Ming had succumbed to a plethora of foot injuries, and head coach Rick Adelman started Hayes at center in all 82 regular season games the year after Yao left the league.

Bio: Entering his sixth season, there’s still plenty of time for Bam Adebayo to move up the list of greatest small centers in NBA history. Even though he doesn’t possess the prototypical size of a five-man, he still has the ability to serve as a defensive presence in the paint.

Arguably the most memorable play of his career came in the 2020 NBA Playoffs, as he blocked Jayson Tatum’s driving layup in Game 1 of the Eastern Conference Finals.

Bio: Head coach Mike D’Antoni gets a lot of credit for ushering in the modern era of the league with how he coached his Phoenix Suns teams in the 2000s. Rather than playing a center who would negatively affect offensive spacing, D’Antoni wanted a player who couldn’t be left open.

Boris Diaw did all that, and more. He could make three-pointers, and most importantly, served as a facilitator with his ball movement on the court.

Bio: Ever since he was winning national championships at the University of Florida, it seemed like Al Horford was destined for a long and successful NBA career. During his time with the Atlanta Hawks, Horford gave opposing teams fits with his ability to knock down mid-range jumpers.

As he’s gotten older, Horford has continued to be a well-rounded component of championship-level teams. With the Boston Celtics last year, he played great help defense and was a threat from the outside offensively as well.

Bio: He wasn’t the most physically gifted player, but Dave Cowens was one of the best centers of his era. There were few players in the league who was tougher than he was and were named to the league’s All-Defensive team three times.

Despite playing against many Hall of Famers in the early 1970s, Cowens was able to bring the NBA MVP award back to Boston in the 1972-1973 campaign.

Bio: It might be somewhat of a surprise to see Charles Barkley’s name on this list. For all intents and purposes, he spent most of his career as a power forward.

However, during some of the most successful moments of his career, Barkley would assume the role of a center for stretches of a game. With the Phoenix Suns, he would routinely do most of the dirty work off the glass and even hit a memorable shot in a one-on-one situation against David Robinson in the playoffs.

Bio: Moses Malone had one of the most remarkable careers in basketball history. He went straight from high school into the ABA, and then played in the NBA for 19 seasons.

His time in professional basketball saw him play against Walt Clyde Frazier and Penny Hardaway. Malone had a special gift for gobbling up rebounds and anticipating how shots were going to come off the rim.

Bio: As indicated above, the days of Draymond Green seeing extended minutes at the center are likely in the past. He’s getting a bit up there in age, and the Warriors have found other players to soak up minutes at the five position.

However, Golden State’s dynasty doesn’t happen unless head coach Steve Kerr has the confidence to play Green at center in the middle of the last decade. Green’s ability to switch off of pick and rolls and initiate fast breaks was exactly what the Warriors needed to complement the greatest shooting backcourt of all time.

Bio: There wasn’t much going on for Ben Wallace early in his career. As an undrafted free agent from Virginia Union college, the chances of him ever making an impact in the NBA were pretty slim.

However, Wallace would get an opportunity to start at center for the Detroit Pistons, and he took full advantage of it. While his trademark afro made him seem taller than he was, Wallace’s strength and athleticism helped Detroit capture the 2004 NBA championship.

Bio: Putting Wes Unseld’s brilliant career as a 6’7” center is pretty easy when you think about who he had to deal with. He played against Bill Russell, Wilt Chamberlain, Kareem Abdul-Jabbar, Bill Walton, Willis Reed, and Bob McAdoo, amongst many other legendary centers who were bigger than he was.

Yet, Unseld always found a way to get it done. He won the NBA MVP and Rookie Of The Year in the same season and would be the centerpiece of the 1978 Washington Bullets championship team.

Who Is The Tallest Center To Ever Play The Game?

The honor of the tallest player in league history is a tie between Gheorge Muresan and Manute Bol. Both men are 7’7” tall.