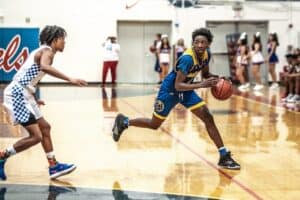 Anyone who has been playing organized basketball games since they were kids knows that the outfit changes a little bit with each level of competition.

It’s always cute when young children who are new to the game don loose fitting t-shirts underneath their regular jersey or pinnie.

While the above fashion statement made by kids (or perhaps their parents) is certainly a rite of passage, the undergarment hiding behind your main uniform tends to change as players get older. For one thing, the fit generally becomes a little tighter, and tends to match the color of your jersey.

At the more advanced stages of the game, college players and NBA players generally don’t deploy shirts under their basketball jerseys. However, some advanced athletes choose to wear a type of fabric under their uniforms, and it’s usually done for certain strategic reasons.

We’ll take a look at what some of those justifications are, and what type of shirts are being used by hoopers of all ages.

Why Some Basketball Players Wear Shirts Under Their Jerseys

This might seem extremely obvious, but staying warm factors into the usage of shirts. It’s easy to think about youth players competing in a gym or at a park that’s got a bit of a chill, but it can be surprising that big time Division I college basketball stars, and even NBA players need an extra layer to keep them warm.

Just ask Naismith Basketball Hall of Famer Patrick Ewing. Before he was a star with the New York Knicks, he was one of the most dominant players at the collegiate level with Georgetown University.

During his time with the Hoyas, Ewing would wear an undershirt because he felt cold during games.

When he was drafted into the NBA in 1985, it was a practice that he wanted to continue, but their rules at the time prohibited him from doing so.

While certain players wear short-sleeve shirts to protect against feeling cold, others deploy shirts in order to control what happens when they get too warm. In a hot setting, or in a situation where you’re playing heavy minutes in a tight game, the perspiration is sure to be plentiful.

However, the presence of an undershirt can help reduce the distraction that sweat can become during a game. It can consolidate into a shirt under your jersey, which will deduce the amount of drippage on to your arms or the court itself.

Having a shirt on will also keep you from needing to wipe down every so often to get dry.

As technology continues to improve, sporting a shirt under your uniform can actually have helpful health benefits. Certain types of shirts promote blood flow and increase the level of oxygen to your muscles.

The combination of those two factors can combat the build up of lactic acid, which cause fatigue. Taking that one step further, muscle fatigue to muscle pulls or strains, so the presence of a shirt can actually help players stay on the floor.

Not all jersey fabrics are created equal, and some can be a little more uncomfortable to wear than others. Over the course of a game, it’s possible for a uniform to uncomfortably graze against your chest, which can cause an undesirable chafing effect.

Electing to insulate your body from your jersey will help avoid this potential issue.

Pros Who Wear A Shirt Under Their Jersey

There’s perhaps no player who comes to mind as an undershirt wearer in the NBA today than Los Angeles Lakers forward Anthony Davis. Even dating back to his earlier days with the New Orleans Pelicans, the star big man would opt to wear something under his jersey.

There may also be no other player in the league who understands the value of wearing a shirt underneath their jersey more. While with the Pelicans, Davis suffered a torn labrum in his shoulder, which is a very difficult injury to deal with considering how much movement that area of the body requires in a game.

There are a lot of shirts out there specifically designed to help shoulder stability, and Davis is a primary benefactor.

Davis’ teammate LeBron James is another player who wears clothing underneath his uniform. His undershirt styling is a little more understated, but is visible during shootaround or after games at his locker.

Milwaukee Bucks star forward Giannis Antetokounmpo is another player who wears a tight fitting undergarment. Just like LeBron, Giannis has a lot of responsibility on the floor for his team, and this helps these high effort players stay dry at the highest level.

What Types Of Shirts Are They Wearing?

The most common type of undershirt being worn today by players is the compression shirt. These are specifically designed to maximize the advantages of wearing an undershirt, not limited to performance enhancement and sweat reduction.

These tend to be the most popular considering the fact that they reduce the amount of soreness players feel after a game.

Antetokounmpo and James usually go with the slender tank top under their uniforms, which aren’t inhibiting and are generally not felt much when the whistle blows.

A regular cotton t-shirt is a staple of the youth player look, and is sometimes even used in college basketball as well. To be clear, there’s nothing wrong with wearing one as long as the league or game situation you find yourself in permits it.

Do All Players Wear Something Under Their Jerseys?

As indicated above, not all players decide to wear something under their jerseys. However, as star NBA players continue to embrace the movement, it’s a good bet that others at all levels of the game will start to follow.