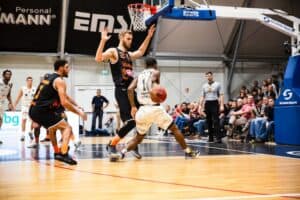 Have you ever heard the crazy theory that playing basketball can make you taller? I remember first hearing this idea when I was a kid playing power forward in youth basketball. I had always dreamed of being 7 feet tall and playing in the NBA.

Unfortunately, even after several years of playing the game, I never grew any taller than 6 foot 3 inches. While that is considered tall by normal standards, it is extremely short for post players in college basketball or the NBA.

The idea that playing basketball can make you taller has been around for years, but evidence does not support the notion that regular basketball play increases an average person’s height. In this article, we’ll dig deeper into this theory regarding height and whether playing basketball affects it.

Is There Evidence That Playing Basketball Makes You Taller?

No, scientists have confirmed that playing basketball has no direct impact on a person’s maximum height. If that were true, then former Charlotte Hornets star point guard Muggsy Bogues would have grown to be much taller than just 5 foot 3 inches. Bogues was never one of the taller players on any team he ever played for, but he excelled tremendously at dribbling and distributing the basketball.

Playing basketball can encourage the muscles to grow and stimulate a person’s appetite. While these are two necessary ingredients to hitting a growth spurt, playing basketball alone cannot make a person grow any taller.

Then Why Are Basketball Players Usually So Tall?

How tall a person gets comes down to one main factor: genetic makeup. If your mom and dad are both tall, you have a great chance of growing tall as you age. The inverse is also true.

How about Shaquille O’Neal? Genetics played a huge role in his immense height as well. Shaq’s father is 6 foot 1 inch tall and his mother is 6 foot 2 inches tall. Shaq outgrew both of his parents quite a bit as he ended up being over 7 feet tall.

Another good example of genetics affecting a person’s height was former NBA center Manute Bol, who grew to be 7 foot 7 inches tall. Bol came from a Sudanese family of extremely tall people. His mother was 6 foot 10 inches and his father was 6 foot 8 inches.

Bol ended his 11-year NBA career with 1,599 points, 2,647 rebounds, and 2,086 blocks. Sadly, Bol passed away in 2010 at only 47 years of age. He is remembered as one of the greatest shot blockers in NBA history and an adamant human rights activist.

The Other Health Benefits of Playing Basketball

As most folks know, any type of physical activity like basketball provides a whole host of health benefits. Here is a list of those benefits.

Basketball is a taxing sport that requires a ton of sprinting. All that running up and down the court means that basketball players can get into phenomenal cardiovascular condition. Being in good cardio shape can reduce a person’s risk of developing heart disease (the leading cause of death) later in life.

While playing basketball, the heart and lungs have to work extra hard to get enough oxygen into the muscles. All of that blood flow is good for the human body, especially for the circulatory system. Once a player is in good shape, his high stamina level will allow him to get through an entire game of running without gasping for air.

Human growth hormone (HGH) is one of the most powerful hormones coursing through the human body. All of that hard sprinting in basketball has a positive effect on HGH levels, especially in young kids and teenagers.

Studies have shown that intense sprinting can temporarily increase HGH levels by as much as 530%! Growth hormone plays an important role in helping children’s bones grow. It can also cause the growth plates to expand, which is how children grow in height.

Playing basketball can greatly stimulate a person’s appetite. All of the running and jumping burns a ton of calories, so it’s vitally important that basketball players eat a balanced diet to get all the essential nutrients that they need.

Eating enough high-quality protein is especially important since muscles cannot recover or grow without it. This is why some basketball players choose to use a variety of protein supplements. It’s tough to get enough protein through diet alone.

An intense basketball game or practice is always incredibly exhausting. However, that high level of physical exhaustion often leads to a much better night’s sleep. There is a direct correlation between physical exertion and quality of sleep.

Again, many NBA players talk about how important it is to get enough sleep each night. Sleep is when the body recovers and grows. Getting a good night’s sleep will help you perform better on the basketball court.

Basketball is more than just a physically demanding game. It also requires quite a bit of mental toughness. It takes guts and resiliency to keep shooting the ball when you’re in the midst of an awful slump.

However, when a player gets stronger mentally, it serves him well both on and off the court. Being able to deal with losses and keep a good attitude is a wonderful life skill to develop. Everyone looks up to folks who can suffer adversity but keep pushing through it.

Basketball is a fast-paced game and players must be able to process information quickly and efficiently. This requires a high level of concentration, especially when learning or running new plays during practices and games.

In a culture that is obsessed with technology, it is getting harder and harder for people to concentrate. Playing basketball can train a person’s brain to concentrate more precisely on whatever tasks they need to be doing. The ability to concentrate can make a person much more successful in whatever endeavor they pursue in life.

It’s a known fact that exercise is a natural stress reducer. Basketball is great exercise and it causes an increase in serotonin, epinephrine, and other powerful endorphins.

This helps basketball players be less likely to suffer from depression and anxiety. Having a positive outlet to blow off steam helps people deal with the daily stresses of life.

Basketball is a team sport and it often enriches a person’s social life. Many teammates become lifelong friends. Having strong friendships is one of the keys to having a happy and enjoyable life.

Getting the opportunity to be a part of a team can improve a person’s social skills. This will help them when it’s time to get a job or help out in the community.

Basketball is a hard game, but doing hard things in life helps increase a person’s self-confidence. The more success a player experiences on the court, the more his self-confidence soars and his self-doubt lessens.

There’s nothing like helping your team achieve an unlikely victory on the court. This boost of self-confidence will help a basketball player succeed in other areas of life like school and work.

Are There Any Sports or Activities That Can Make You Taller?

No, as we said before, no sport can directly impact a person’s height. With that being said, playing sports like basketball or volleyball may have an indirect impact on a person’s diet, hormone levels, and sleep.

People have their biggest growth spurts when they are going through puberty. Boys and girls both experience rapid height growth during these times. This occurs because the pituitary gland produces lots of powerful hormones during growth spurts.

NBA stars like David Robinson had an incredible growth spurt between his junior and senior years in high school. “The Admiral” grew from 5 foot 9 inches all the way to 6 foot 7 inches during that one year. That’s why Robinson blossomed as a basketball player and dominated on the court during his senior year of high school.

The crazy thing is that Robinson kept growing through his early 20s and ended up being 7 foot 1 inch tall. That height combined with his amazing basketball skills is why the San Antonio Spurs drafted him after his collegiate career at the Naval Academy was completed. Robinson ended up having a fabulous NBA career and was inducted into the Naismith Basketball Hall of Fame in 2009.

Hall of Famer Scottie Pippen is a prime example of this. Pippen was only 6 foot 1 inch when he graduated high school, but he grew to be 6 foot 8 inches by the time he graduated from the University of Central Arkansas. This just goes to show that not all boys stop growing at age 19.

Another example of a late-bloomer in height is one of the best rebounders of all-time, Dennis Rodman. Rodman was only 5 foot 6 inches when he started high school and was still only 5 foot 9 inches at age 19.

That’s where things took off for Rodman. He experienced a 10 inch height increase during one summer that made him 6 foot 7 inches tall. That single growth spurt changed the entire direction of Rodman’s life.