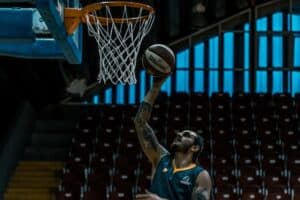 Love of the game knows no bounds, and this holds true for players and fans of the Islamic faith as well. Some of the best players in the world are Muslim, and it provides people with a valuable opportunity to learn how their faith intersects with their lives on the basketball court.

While players look forward to Ramadan each year, it can cause some inconveniences for athletes. Since they aren’t able to replenish fluids or ingest nutrients throughout the day, concerns surrounding proper hydration and energy levels come into play.

This can sound like a major obstacle to overcome, but Muslim basketball players have been participating, and even thriving in games played during Ramadan.

We’ll take a look at NBA players from the present day and from yesteryear who practiced Islam.

The most recognizable Muslim player in the NBA today is Brooklyn Nets point guard Kyrie Irving. He’s been polarizing, dazzling, and intriguing for over a decade, and will be an integral component of Brooklyn’s plans to win a championship this season.

He’s been named to the All-Star team seven times in his career and won an NBA championship in 2016 with the most dramatic of performances. He connected on a three-pointer over Golden State Warriors guard Stephen Curry in Game 7 of the NBA Finals to bring home the title.

Fans don’t have to go back in time very far to recall a great game Irving had while celebrating Ramadan. Although Brooklyn was swept by the Boston Celtics in the first round of the 2022 NBA playoffs, Irving put on a show in Game 1, scoring 39 points on the road.

The veteran point guard has been a solid contributor wherever he has played in the NBA. Schroder has been valuable in a multitude of roles, including as a starter with the Atlanta Hawks earlier in his career, and as a reserve more recently with the Los Angeles Lakers and Oklahoma City Thunder.

He has returned to the Lakers ahead of the 2022-2023 NBA season and will carve out a role in a crowded backcourt.

The big man from Bosnia has become a reliable NBA center. Nurkic started his career with the Denver Nuggets, splitting minutes with MVP center Nikola Jokic. He has spent the last six seasons with the Portland Trail Blazers, where he’s averaged 14.6 points per game and just under 10 rebounds per contest.

Since he entered the NBA in 2013 out of the University of Louisville, Dieng has been an asset on the defensive end of the floor. He provides a shot-blocking presence in the paint that alters the attempts of penetrating players.

The center finds himself in a rebuilding situation with the San Antonio Spurs, but don’t be surprised if he ends up on the roster of a contending team later in the year.

The Toronto Raptors’ swingman has made a career out of perimeter defense. He will likely reprise that same role north of the border this season, as Hollis-Jefferson will serve as quality depth for head coach Nick Nurse should injuries take place.

The most accomplished scorer in NBA history was Muslim. Kareem Abdul-Jabbar scored 38,387 points in his career, a record that is being chased down by current Los Angeles Lakers star LeBron James.

What makes Abdul-Jabbar’s scoring record even more impressive today is the way in which he amassed all of those buckets. He had an unstoppable, un-blockable sky hook shot, which defenders knew was coming but couldn’t neutralize.

His career accomplishments and legacy as perhaps the most dominant player in NBA history can’t be denied. O’Neal’s unmatched power and athleticism in the post were impossible for other centers to stop, as he would always find a way to get to where he wanted to go.

O’Neal’s accolades as a big game player are amongst the best of any player in history. He’s won three All-Star game MVP awards, as well as three straight NBA Finals MVP awards in the early 2000s with Los Angeles.

Since his playing career ended, O’Neal has remained relevant in the basketball world as a panelist on TNT’s NBA studio coverage. His perspective on players and teams, as well as his unrelenting humor, is something fans across the world gravitate towards.

There’s perhaps no NBA player who excelled during Ramadan than former Houston Rockets legend Hakeem Olajuwon. He welcomed the challenge of playing during the fasting period, as it gave him a mental edge and confidence when he played better than opponents who could drink Gatorade or water during a timeout.

It was an extraordinary approach to take, considering that many people would focus on what they didn’t have throughout the course of the day. In games he played during Ramadan during the 1994 and 1995 seasons, Olajuwon averaged 29 points, 10 rebounds, three blocks, and nearly four assists per game.

While his personality and mannerisms often get discussed before his impact on the floor, Rasheed Wallace was one of the most talented power forwards in NBA history. He came into the league during an era where players at his position weren’t supposed to have an offensive impact outside of 15 feet.

With an adept range from the outside and an array of post moves on the block, Wallace played on many contending teams, including the 2004 Detroit Pistons which won the title.

The NBA’s experiment in Vancouver, Canada did not last very long but don’t blame that on the play of Shareef Abdur-Rahim. The 6’9” forward had a smooth offensive game coming out of the University of California, averaging over 20 points per game for the Grizzlies over five seasons.

(Note: While he’s technically still a free agent, we’re going to Enes in the “past” players section until he gets signed…)

When given the chance to play significant minutes, Kanter was an automatic double-double, notching 10 rebounds and 10 points minimum in his sleep. Originally from Turkey, he was selected with the third overall pick in the 2011 NBA Draft.

While these types of players have always existed in the NBA, the term “three and D” guys didn’t really become part of the NBA vernacular until the last 10-15 years. Al-Farooq Aminu’s play qualified him as one of these players, who would hound offensive players on one end, and spot up in the corner for free-pointers when his team had the ball.

Nicknamed “The Manimal” coming out of college, Kenneth Faried’s drive and desire to come up with the ball gave him a unique role in the league. Due to his unlimited energy, he would gobble up rebounds despite contending with taller players.

His career got off to a very slow start with the Milwaukee Bucks, but credit Ersan Ilyasova for never giving up. He became a respected commodity as front offices searched for players with size who could stretch the floor.

The best game of his career came in 2012 against the then-New Jersey Nets, where he scored 29 points and hauled in 25 rebounds.

If it wasn’t for injuries, it’s possible that Mahmoud Abdul-Rauf would’ve been Kyrie Irving before Kyrie Irving. Formerly known as Chris Jackson, he had a dynamite handle with an exceptional shooting ability.

Abdul-Rauf lasted nine seasons in the NBA, and can still be seen hooping in the BIG3 league for retired players.