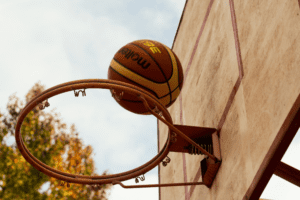 Golden State Warriors forward Draymond Green was at the free throw line during Game 4 of the 2022 Western Conference Finals against the Dallas Mavericks when something bizarre happened.

During his first of two attempts, Green’s shot rolled around the rim, and the ball ended up coming to a dead stop on the back of the rim! Everyone at the arena started laughing, including Green himself, and Mavericks star guard Luka Doncic.

You can play basketball your entire life without seeing something like that happen, but as we saw last summer, it’s within the realm of physical possibility.

We know that everyone here is focused on getting the ball through the basketball hoop and the net, but we’ll take a closer look at the oddity of rim rest—when a ball sits on the rim and stops spinning or rotating.

In professional basketball, there are actually rules that inform what happens if rim rest takes place.

The most common resolution to an episode of rim rest is a jump ball. After the whistle blows and a dead ball is declared, two players jump in the middle of the basketball court to tap the ball toward a teammate.

In other jump ball situations, the two players fighting for possession will jump it up. In the case of a rim rest-induced jump ball, teams can pick anyone currently on the court to participate.

Some leagues will actually give possession to the other team if a missed shot results in rim rest during live gameplay.

In the case of Green’s rim rest incident in the Western Conference Finals, the first free throw attempt was deemed no good, and he proceeded to shoot his second attempt.

Other FAQ’s About Basketball Rims

Can you block a shot through the rim?

For many players who can’t jump out of the gym(don’t all raise your hands at once), this question leans more towards being a good problem to have rather than a potential point of contention. At advanced levels of basketball though, this becomes a legitimate question.

Defensive players aren’t allowed to block shots through the basket. Hands and arms must strictly remain around or above the rim, but never through it.

If this does take place, this counts as a form of goaltending, which is a rule that covers a wide range of illegal ways to prevent a ball from going through the hoop.

In addition to being impermissible, it’s also generally not advisable. Going through the hoop to block a shot leaves your fingers exposed to being jammed by the ball or rammed into the rim.

Does the ball have to hit the rim to be a rebound?

Cleaning the glass or hitting the boards are two terms often interchangeably and commonly used when referring to rebounding. These allude to missed shots coming off of the rim or backboard, into the waiting hands of an offensive or defensive player.

Most basketball players and fans understand the notion of a shot caroming off of the rim and into a player’s hands, and that being logged in the stat sheet as a rebound. While that’s the most likely scenario, the definition of what a rebound actually constitutes actually is a little broader than that.

If an offensive or defensive player comes down with the ball after a player is deemed to have taken a shot attempt, then that qualifies as a rebound.

It doesn’t matter if the shot struck the rim or the backboard, but it must have been attempted before the shot clock expired.

The challenge for the official scorer can sometimes be determining whether a ball pushed in the general direction of the rim represents a shot. Especially in the NBA, it’s not unusual for players to throw the basketball near the rim, in hopes that one of their teammates will swoop in to dunk or lay the ball into the basket.

If the ball is headed toward the basket but is designated as a pass, it will be logged differently even if the ball hits the rim. In most cases, a turnover/steal will be recorded if the defensive team comes away with the ball, but won’t have any particular statistical designation if a teammate comes away with the unorthodox pass.

What is it called when the ball doesn’t touch the rim?

If a shot attempt doesn’t hit the rim, it’s known as an airball. Amongst serious basketball players, airballs are one of the most embarrassing outcomes for a shot, since it means you didn’t even come close to drawing iron on your shot.

Basketball fans are delighted to see an opposing player draw air in high levels of basketball, and will usually let the shooter hear about it for a few seconds. Chants of “airball” take over the airwaves as a player trots back on defense.

Don’t worry too much about shooting an airball yourself though. Even the best players shoot them from time to time, and there will always be another chance to make a play.

Why do some hoops have a double rim?

Especially in recreational outdoor settings, basketball hoops are known to have double rims. We’re familiar with the single-rimmed apparatuses in college basketball and NBA arenas, but your local park’s rim will be a little bit thicker.

The main reason why double rims are used is to fortify a hoop during inclement weather, which is a possibility in many areas of the country.

As much as some players might not want to admit it, a double rim can affect how players approach shooting. Ricochets off of the rim feel less likely to bounce in on a double rim than a single rim, so a shooter’s goal will be to swish jump shots each time to minimize contact with the iron.