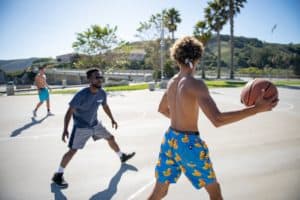 I remember the first time I heard the phrase “dropping dimes” while watching an NBA game.

Legendary point guard John Stockton of the Utah Jazz was loading up his stat sheet with a ton of assists. The announcers said Stockton was dropping dimes to everyone on his team.

What does it mean when someone drops dimes in basketball? Find out here.

What Does Dropping Dimes Mean?

Dropping dimes is a catchy slang phrase for assists in basketball. The phrase is normally used when a basketball player makes a highlight reel type of pass like a no-look pass or an alley-oop that ends in a vicious slam dunk. This usually results in the crowd going crazy!

To get an assist, a player must pass the ball to one of his teammates who then makes a basket. When you hear the term “dime” used on the court, it is referring to a remarkable assist. Dropping dimes is now one of the most popular phrases in basketball terminology.

Where Did Dropping Dimes Come From?

Before cell phones, payphones were the primary form of communication if you were away from your home phone. Back in the old days, the cost to make a call from a payphone was ten cents (a dime). If a person was running low on change, they may ask you to drop a dime for them (or assist them with making a call).

Eventually the phrase “dropping dimes” made its way into basketball terminology and became a fun way to describe an immaculate assist. The phrase can also refer to someone making a perfect pass through a tight window.

Interestingly enough, football announcers also use the phrase dropping dimes when a quarterback is making difficult throws during a game.

We can’t mention dropping dimes without talking about the great Steve Nash. Nash finished his 18-year NBA career with 10,335 assists, which ranks third on the all-time career list.

You’ll notice in the video below that although Nash is double-teamed, he calmly performs a perfect bounce pass between the defender’s legs. This results in an easy layup for his teammate and is a great example of dropping a dime.

Stockton is the NBA’s all-time leader in career assists. The former Jazz point guard was only 6-1 and 170 pounds but he could drop dimes into the tightest of passing zones.

He finished his career with 15,806 assists, a record that may never be broken.

CP3 is another legendary dime dropper! Paul ranks first on the active list in assists with 10,275.

Check out the video below to see how perfectly he executes the hook pass to get the ball to Blake Griffin for a thundering slam dunk.

James may be more well known for his innate scoring ability but he’s also one of the game’s greatest passers of the basketball. He currently ranks eighth on the all-time assists list with 9,696.

Look at how effortless James makes the baseball pass and behind the back pass during Game 6 of the Eastern Conference Finals a few years back!

Magic was one of the most exciting passers in NBA history.

He was the cornerstone of the ShowTime Lakers back in the 1980’s and had better vision on the court than any other player of his era. Magic finished his career with 10,141 assists.