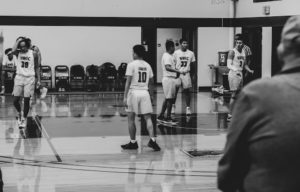 What is a Loose Ball Foul?

Here are a few common examples of a loose ball foul:

When a Loose Ball Foul Results in Free Throws

The only time a loose ball foul results in free throws is when the fouling team is over its team fouls limit. This means that it’s a penalty situation and will result in either a one-and-one (high school and college) or a two free throws scenario (NBA).

If a loose ball foul is called against the defensive team while a successful field goal attempt is made, that player will be awarded one free throw and the chance for a three-point or four-point play.

Here’s the best way to draw a loose ball foul:

The ideal strategy to avoid getting a loose ball foul called on you is to avoid physical contact with the other player that is going for the ball. At times, this is impossible. However, try to focus on gaining possession of the ball and not impeding the other player’s attempt at the ball.

If the other player beats you to the ball, simply try to grab the ball from him without touching him. This will result in a jump ball call from the referee.

When going for a loose ball, avoid punching, pushing, or shoving the other player. The last thing your team needs is a flagrant foul called on you for unsportsmanlike conduct. Toughness on the court is admirable, but be respectful at all times.

Bonus Tip: When diving for a loose ball, keep in mind that sliding with the ball in your possession could result in a traveling violation. It’s best to not leave your feet unless it is absolutely necessary.

Other Common Foul Types in Basketball

There are a large number of different types of fouls in basketball. Here is a quick list for your reference and convenience:

One of the most common fouls in the game is the shooting foul. This happens when a defensive player illegally bumps, hacks, or illegally contacts the offensive player during the act of shooting. Each time this occurs, the shooter is awarded two free throw attempts (only one if he made the shot).

This is another foul that is called on defensive players. It happens when a defender is trying to steal the ball and ends up making contact with the ball handler. The defender tries to knock the ball away but ends up slapping the arm of the offensive player instead.

The penalty counts against the player’s personal fouls and the number of team fouls. However, free throws are only awarded if the offending team is over the limit.

Over the Back Foul

This type of foul is only called when two or more players are going for a rebound. An over-the-back foul can be called on an offensive or defensive player. Here’s how it works:

When a charge is called, the offensive team loses possession. If the offensive team is over their foul limit, the defender who took the charge will be awarded free throws. Taking a charge shows a large amount of grit and can swing the momentum in that team’s favor.