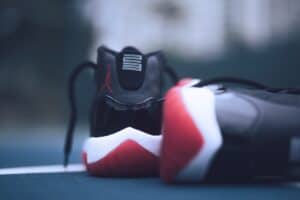 At first glance, it might seem like there are no commonalities between a 10 time NBA All-Star, a rotational college hoops player, a high school sharpshooter, and a youngster looking to have a great time in a youth basketball league, besides that they play the game.

The ages of the players greatly vary, the competition level is night and day, and the amount of money poured into each level of the game can’t remotely be compared.

However, a closer look reveals that there is something that players at every level do.

They all wipe their shoes whenever they have a chance. A stoppage of play is ideal to do a little housekeeping under the bottom of their footwear, but if a player can sneak in a quick sole pass over before the ball is inbounded, they’ll do it.

It’s an interesting thing to pick up on because it means that players at each stage of the game make it a priority. But why is this phenomenon so pervasive among basketball players of all ages?

Why Basketball Players Wipe The Bottom of Their Shoes

A lot of times in sports or even in life, when someone remarks that a thought or belief is “all in someone’s head”, it can be perceived as a slight.

However, for athletes, there’s a whole game that is played between the ears in addition to the proceedings taking place on the court. Competitors often feel the need to win their personal mental game before trying to defeat their opponent.

Wiping the bottom of sneakers multiple times a game gives the player a reassured sense of comfort that their feet won’t give out from under them. There’s always a chance that someone can land awkwardly on another player’s foot to cause a lower leg injury.

But taking matters into your own hands by ensuring optimal traction throughout the course of the game relieves a consistent nagging mental concern of slipping on basketball courts. Reducing the risk of injury is something everyone is interested in.

While the action of wiping soles of shoes to remove dust, dirt or debris is often proactive, it can also improve traction with each step. This makes a big difference, as a player can move more assertively on defense, which leads to faster running.

On both sides of the court, better grip on gym floors for start and stop movements is ideal to shake a pesky defender, or to stick with an offensive player who is using every move in the book to get open.

Answering a question with a question is usually not the preferred way to go, but thinking about the question in reverse is also interesting here.

What would happen if basketball players didn’t wipe the bottom of their shoes? Would there be any noticeable uptick in slippage, ankle injuries or foot ailments?

It’s hard to answer that question definitively with any sort of reliable data, but basketball players know that once their explosion is compromised in any way, it severely limits their ability to be effective.

It affects jumping ability, lateral mobility, quickness, and everything else that goes along with it. It makes perfect sense why this corrective action would be near and dear to a player’s heart.

What Do NBA Players Wipe Their Feet On?

The most common mechanism used in the NBA to ensure optimal traction underneath the sneakers of multimillion dollar athletes is the sticky mat. We usually see them come into play at the very beginning of the game, as the starters for each team will step on them as one of the rituals to get ready for tip off.

There’s actually an official sticky mat partner of the NBA, which primarily utilizes the Slipp-Nott. The product was created back in 1988 by Jorge Julian, who was a casual basketball player himself. Julian brought the newly conceived concept to different colleges around the United States to see if they found it useful.

It received rave reviews from collegiate basketball players, who remarked that they felt a huge difference pushing off after stepping on the Slipp-Nott. With that endorsement, Julian eventually brought it to the NBA, who has adopted them ever since.

The product would come standard with 50 adhesive mats to step on, which could be ripped off the bottom of players’ sneakers once it was ready to be disposed of.

There are a lot of alternatives to the Slipp-Nott on the market now, so the premier solution to remove dust and dirt from the bottom of basketball sneakers is not just limited to the professional ranks.

Other Ways Basketball Players Increase The Grip on Their Shoes

If you’re interested in learning how basketball players can improve the grip on their sneakers, this article on our site specifically delves into that topic. We can share a couple of the methods included in that article here if you’re in a time crunch on your way to the game.

It’s a little counterintuitive, but water can actually help enhance the level of grip on your basketball shoes. Don’t make a mess by leaving large puddles on and around the court, but stepping on a little bit of water, and then grazing your feet against a dry part of the floor will help your cause.

Another resourceful way to increase traction at the bottom of your shoes is to use the natural “water” that you produce from playing hard in the game. Not to get overly graphic, but intense matchups usually lead to copious amounts of sweat.

Wiping sweaty palms against the soles of your sneakers can actually serve you well in two ways. You are applying the moisture needed as a water substitute against your sneakers, which would have the same effect as the first method.

Additionally, your hands are now drier, which is a good thing since you don’t want the ball slipping out of your grasp at a critical point in the basketball game.