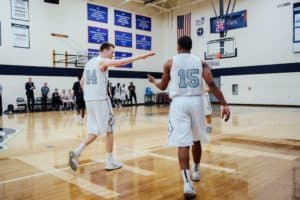 Have you ever noticed that basketball games are made up of either four periods or two halves, depending on the level of basketball?

This can be confusing, especially if you are new to the game and not familiar with each league. Our goal with this article is to clear up any confusion about how many periods each league plays.

A basketball game typically has two halves of two periods each. Teams get a quick breather in between periods and a longer halftime break after the second period. Learn more about basketball’s periods here.

How Many Minutes Total in a Basketball Game?

The total number of minutes played in a basketball game varies from league to league. There are different rules for high school, college, and the NBA. We’ll dive into the minutes for the NBA, WNBA, NCAA, and high school basketball.

How Many Periods are There in a Basketball Game?

NBA games are divided into four separate periods (often called quarters) and each period is exactly 12 minutes long. The players get a quick two and a half to three and a half minute breather after the first and third periods are completed. The length of the break depends on if the game is nationally televised or not.

After the second period ends, players get a halftime break of 15 minutes before the third period begins. Halftime breaks give the players a chance to rest up and get hydrated as the coaches strategize for the second half.

Each half lasts for twenty minutes and there is a 15-minute break for halftime before the second half starts. A men’s college game is 40 minutes long unless the game is tied and goes to an overtime period.

Does College Basketball Have Four Periods Too?

Interestingly enough, NCAA Men’s basketball experimented with four periods during the 1951-52 and 1954-55 seasons. The rule was changed back to two twenty-minute halves shortly after each season.

How About High School Basketball?

Most high school basketball games are 32 minutes long. Four periods of eight minutes each are played. After the second period has ended, a halftime break of 10 to 15 minutes takes place.

How Long is Overtime?

The NBA, WNBA, NCAA Men’s, and NCAA Women’s all have five-minute overtime periods if the game is tied at the end of regulation. High school basketball uses an overtime period that is four minutes long.

How Long Does it Take to Complete a Basketball Game?

Like we mentioned above, NBA games are 48 minutes long while high school basketball games are only 32 minutes long. That 16 minutes may not sound like a big difference.

However, when we break it down math-wise, that equates to the NBA games being 50% longer than high school games.

Another reason NBA games take so much longer than high school basketball games is TV timeouts. All NBA games are televised, so many commercial breaks are needed to run TV ads.

High school basketball games are never televised, with the rare exception of two powerhouse programs on ESPN every once in a great while.

During an NBA game, each team is allotted seven timeouts. Each timeout can last up to 75 seconds.

During a high school basketball game, each team is only allotted five timeouts and two of those are only 30 seconds long. That equates to an NBA game having four more stoppages of play than a high school game just due to the number of timeouts alone.