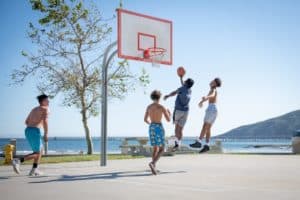 Back in my playing days, I was amazed at how much my overall game improved just by playing in pickup basketball games throughout the summer. While there is plenty of value in practicing by yourself, playing pickup games gives you the chance to simulate game action. Playing in pickup games is also a great cardio exercise and will help to get your lungs into basketball shape.

What is Pickup Basketball?

Pickup basketball is when a group of players gets together to play an informal game. There are no set rules and the game can be played in either a full-court or half-court format. The number of players in a pickup game varies depending on who all want to play.

Pickup games are often light-hearted and genuinely fun. However, there are no officials so that normally means there are no fouls called. Some hardcore pickup games adhere to the old “no blood, no foul” saying as an unwritten rule. In other instances, fouls are called on the honor system (defensive player must admit to fouling the offensive player).

How Do You Play Pickup Basketball?

Most of the time, pickup basketball games are played amongst strangers at parks, local rec centers, or YMCAs. In pickup ball, teams are formed by two captains who select their teammates. After the two teams are assembled, the two captains have to decide which team will have the first possession.

There are many ways to decide who gets the ball first. Some folks prefer a traditional jump ball while other people prefer to simply flip a coin.

Another popular way to decide possession is to have a player from one team shoot from the top of the key from behind the three-point line. If the shooter makes the shot, his team gets the ball first. If he misses the shot, the other team takes possession.

Winner’s ball can be lots of fun because a team can get hot and make a tremendous comeback. However, winner’s ball can give an unfair advantage to a team that is stacked with good players. A large majority of pickup games employ the winner’s ball rule.

After all the details are agreed upon, the pickup game then begins and is played almost like a normal basketball game. The game ends when one team meets the agreed-upon point total.

How Long is a Pickup Basketball Game?

The answer to this question is “it depends”. As we mentioned earlier, in a pickup basketball game the two teams battle it out on the court until one team reaches the selected number of points. Most of the time, an agreement is made that the winning team must win by at least two points.

For a quick game, the two captains may set the winning point total at ten. For a longer game, the teams may agree to play until a team reaches 50. The majority of pickup games are played until 21 points are scored.

Why is it Called a “Pickup” Game?

Basketball pickup games get their name from the randomness of the activity. Pickup games aren’t planned and some of the rules are made up on the fly such as whether or not three-pointers count as three points, two points, or even just one point. Pickup games are also referred to as street-ball.

What are the Main Advantages of Playing Pickup Games?

There are several advantages to playing pickup basketball games. Here are a few of the main ones:

1. Conditioning: Nothing will get a player in great physical shape faster than playing pickup basketball. In pickup ball, players are constantly sprinting up and down the court. Since there are little to no fouls called and also no timeouts, there is less time for players to rest. This will help build up a player’s endurance level.

4. Meet New People: Though pickup games are often played amongst people who don’t know each other, they’re a great way to meet new people who love to play basketball. Many lifelong friendships are formed because of a random pickup game on the asphalt. Pickup basketball is a fantastic way to make new friends.

There are tons of different ways to find pickup basketball games in your neighborhood. If you have a smartphone, you can download several different apps that will show you where and when pickup games will be played. Some of the most popular apps are HoopMaps, InfiniteHoops, and Pick-N-Play. All three of these apps let you search for pickup games by typing in your zip code.

Though these apps are a fantastic way to play pickup games, many people prefer to just show up at their nearest outdoor city court. There is nothing wrong at all with this method. Keep in mind though that you run the risk of having to play by yourself on an empty court.