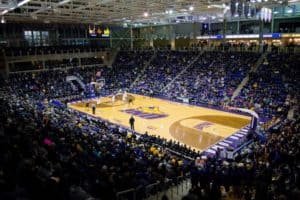 It’s something every college basketball fan has wondered about during the March Madness NCAA Tournament. You’d love to know exactly how much time you have to make more of your favorite snacks before the second half begins.

It’s the most frequently asked question during college basketball games. Learn all there is to know about halftime here in this article.

How Long is Halftime in College Basketball?

Halftime is the best time for the TV networks to run several different commercials for their sponsors. The sports commentators will also issue a halftime report where they assess how each team performed in the first half.

What Do Teams Do During Halftime?

College basketball teams are hard at work during the brief halftime period. Coaches are going over the new game plan with their respective teams and talking with their players about the second-half adjustments that need to be made.

Halftime is a great time for the players to relax and rehydrate with lots of water or sports drinks. In rare cases, extremely dehydrated players will get an IV from the training staff. Injured players are also evaluated at halftime by the team’s trainers and medical doctors.

What Happens After Halftime?

After the 15-minute halftime break is over, teams jog back out onto the court. Players go through a brief warm-up period where they will shoot jumpers on their new end of the floor. They may also go through another series of stretches to avoid any type of muscle pulls or strains.

After the brief warm-up, coaches will reiterate the team’s new second-half strategy and maybe give the players a small pep talk. Once the buzzer sounds, it’s time for the second half to get underway. The team that did not take possession of the jump ball at the beginning of the game will not start with the ball to begin the second half.

Coaches then start hoping and praying that they made the correct adjustments during the break!

How Long is a Full College Basketball Game?

Did you know that the longest college basketball game in NCAA history went into seven overtime periods and took 75 minutes of game time? The Cincinnati Bearcats took down the Bradley Braves by a score of 75-73 back on December 21, 1981.

The game was played before the shot clock or three-point shot was invented. The 7,300 fans that were in attendance definitely got their money’s worth.

How Long is Halftime in High School Basketball?

Since high school basketball is played in four quarters instead of two halves, the halftime break in high school is often a little quicker than the college ranks. Keep in mind that high school teams get a quick breather after both the first and third quarters.

How Long is Halftime in The NBA?

Like college basketball, the NBA also adheres to a 15-minute halftime break. This gives the NBA players a chance to rest before heading out for the third quarter. The athletic trainers will be busy retaping some of the players’ ankles while the coaching staff will discuss the second-half strategy with the entire team.

Most of the time, players won’t stay in the locker room for the entire 15-minute break. After eight minutes or so, most players will head back out onto the court to shoot some warmup shots before the third quarter begins. Most players prefer to shoot some jumpers on their new side of the court.

There are a few instances where halftime may take a little longer than 15 minutes in the NBA. All-Star games and playoff games may have a popular band or singer entertaining the crowd during halftime. It may take an extra 5-10 minutes to set up and take down the stage.

Which Sport Has The Longest Halftime Breaks?

Interestingly enough, the NFL halftime break is only 12 minutes. However, massive events like the Super Bowl have halftimes of up to 30 minutes in length because of all the festivities and lengthy halftime show.