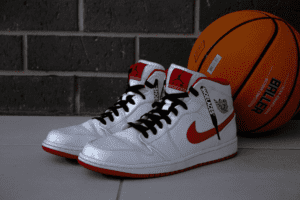 When was the last time you invested a lot of thought in your feet? It’s a strange way to tip off a piece, but here in this basketball safe space, few things are off-limits.

The most dedicated basketball players realize that taking care of their bodies first will then allow them to focus on honing their skills on the basketball court. The era of set shots and standstill play is long gone, and players need to generate lift and burst with their feet.

While it isn’t our goal today to take a deep dive into the world of podiatry, we will pay special attention to players with flat feet. What challenges do athletes with flat feet have?

Without an arch in their foot to speak of, basketball players with flat feet can potentially absorb more impact in their ankle areas. Couple this with the possibility of spraining an ankle via the traditional course of a game, and this can become problematic pretty quickly.

Another issue is the increased likelihood of dealing with plantar fasciitis, which is an inflammation of a large band of tissue in the foot. It can be extremely painful to deal with and can make it hard to walk, let alone contribute to a competitive basketball game. The Scoop: We’ve reached the top of the mountain as it relates to the ideal offering for flat-footed ballers. The Nike KD 14’s widely considered to be the premier product in this space and has a lot of things going for it.

The KD 14’s have excellent traction, which precludes the worry of sliding around the court when making a sharp cut to the hoop. This makes logical sense since Kevin Durant’s game features a lot of “hesi” pull-up jumpers, where he needs to start and stop on a dime to keep a primary defender off-balance.

The amount of cushion provided by KD 14’s is difficult to beat, as its midsole checks off any shock absorption concerns, and gives players a helpful level of bounce with each step.

In addition to being a go-to option for players with flat feet, it also accommodates hoopers with wide feet. The shoe has a wide base, which allows your feet not to feel like they’re in a straight jacket. The Scoop: As Giannis Antetokounmpo continues his quest for a third MVP award, one of his signature sneakers continues its ascent up the rankings of good basketball shoes. This is an interesting addition to the sneaker verse because people have wondered whether his infamous Euro-step has influenced the design of the product.

The cushioning is impressive throughout, as the heel counter catches the back part of your foot, while the forefoot is insulated by zoom air pods. Some in the industry think this technology is a little outdated, but it’s still well-received for its effectiveness.

The Zoom Freak 3 also has a midsole that curves the middle of your foot, to help provide an arch that does not exist naturally for flat-footed players. The sneaker also features a strap whose value has been questioned, but some players do like the piece of mind it gives them from a support perspective.

The Scoop: If the Curry Flow 9’s could help you shoot like the Golden State Warriors’ marksman, they might be at the top of the list. Landing at number three is still pretty commendable for a shoe that’s a favorite amongst guards for the well-rounded support it gives them.

While many basketball players will settle for shoes having good traction, the Curry Flow 9’s have been said to have great grip. This amount of stickiness with the floor, if you will, still doesn’t prohibit players from darting through screens set on the baseline meant to get them an open jumper.

Titans of the sneaker world like Nike and Adidas have been lauded for their cushioning and comfort technology, but Under Armour has taken notable strides in order to close that gap. It has been reported that the Curry Flow 9’s are more responsive than previous iterations, which gives floor generals the maneuverability they need to manufacture points.

Link to buy on Under Armour The Scoop: Royalty has a place on the basketball court, especially when it comes to King James and his kicks. There are a couple of solid choices in LeBron’s corner of the market that should be considered by the flat-footed community.

Both the LeBron Witness IV and V receive high marks for their comfort in the heel area. The heel counter and padded heel collar provide a superior cushion in that area, and the foam midsole is also sweet.

These sneakers are also well regarded for their breathability, as they allow for a refreshing amount of airflow.

While your feet will receive comfort fit for his or her majesty, there are a couple of factors to consider before splurging. The sneakers tend to run a little narrow, so those with wide feet may want to look elsewhere.

In addition, some have remarked that the Witnesses are a little heavier, which may deter players whose game is predicated on speed.

5. Adidas Own The Game Adidas Own The Game Check Price on Amazon

The Scoop: While this pair may not be directly linked to an NBA player, the Adidas OwnTheGame shoe has a lot of things working for it. It’s got a great price point, allowing players with flat feet to get a quality sneaker while saving money for other basketball-related purchases.

Once you bring these shoe home from the store or have them arrive at your doorstep, you can be very confident that they’ll be a mainstay for many years. OwnTheGame is well-regarded for its durable study material.

Another worthy feature is its Ortholite lining, which prevents your feet from getting too sweaty while providing insulation. It also has Cloudfoam in the midsole and footbed areas.

The shoe figures to last a long time due to its formidable construction, but this comes with a prospective downside. OwnTheGame has been said to offer less flexibility than some of its counterparts. The Scoop: Although Damian Lillard’s talent is right up there with some of the best players in the game, he’s often overlooked in the elite tier of NBA superstars. His signature sneaker, the Dame 3, is also underrated but gets the job done in crunch time.

Dame 3’s are a proper footwear selection for those with wide flat feet who want command of each and every step on the court. At a minimum, customers of the shoe have commented on its good grip, while others rated its traction among the best out there.

The sneaker features mesh material that gives it pliability. Despite this elasticity, some players feel like it takes a little longer to break in the Dame 3’s compared to other shoes. The Scoop: The business leader in sneaker sales makes yet another appearance on this list, as the Nike Air Visi Pro’s another terrific direction for flat-footers to go in. In fact, the Air Visi’s are also known as a good choice for those with defined arches as well.

They provide a bundle of ankle support, which should allow you to showcase the entire bag of dribbling tricks. In addition, the Air Visi Pro is very breathable, which is a huge plus if you’re playing heavy minutes or are in your fifth consecutive pickup game.

The shoe is made out of durable rubber which helps act as a balance stabilizer when you’re trying to slide your feet to stay in front of a shifty offensive player.

One slightly comedic downside of this sneaker is that you might hear it coming from a mile away with its squeakiness. However, if you’re a player who plays with maximum effort, your sneakers might be noisy regardless as your presence is felt all over the court. The Scoop: The Flytrap features a large sole, which is music to the ears of the audience of this piece. This allows for extensive coverage and a more expansive area of support for your feet.

The traction of the Flytrap is fantastic, and it’ll behoove players to test the stability of their defenders by utilizing herky-jerky motions to get open. This shoe is another one bolstered by Zoom Air technology, so your feet will feel very comfortable while you decide how you’re going to get the edge on your opponent.

While there are a few important benefits with the Flytrap, one con of the shoe is that they’ll likely break down on you sooner than other sneakers. Flytraps are probably best deployed on an indoor playing surface where exposure to the elements can be limited.

The Scoop: It makes sense that the most famous shoe of all time would make an appearance on this list. Air Jordan’s are synonymous with greatness, and the 36 Low makes for a commendable choice for the flat-footed population.

Fans can always trust that the stylistic components of an Air Jordan shoe will be top-notch, but the practical setup of the sneaker will also be much appreciated by players. It has a unique Lenoweave upper that’s supportive but doesn’t feel too bulky.

The 36 Low’s also come with an Eclipse Plate, which steps up the arch support game to dunk over its competition.

One minor bone to pick is that the shoe has sometimes felt a little rough on pinkie toes, which might become increasingly annoying over time.

Link to buy on Nike The Scoop: Wide flat-footers, look away; the D.O.N Issue 2 is generally ideal for those with narrow hooves. With that said, this product is a great option for those with flat feet because it doesn’t compromise quality in a couple of key areas.

The D.O.N. Issue 2 scores point with its lightweight feel and sturdy support throughout. It successfully toes the line of being nimble enough to give players the ability to fly to the ball, while not feeling overly clunky.

It’s also pretty affordable and can make for a great gift this holiday season without breaking the bank.