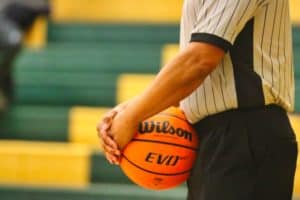 If you are new to the game of basketball, you have probably wondered what the deal is with all of the signals from the referees. To a basketball newcomer, it can seem as if the officials have their own unique sign language. This can make for a very confusing experience if you don’t understand the signals.

Ever wonder what the referees are signaling during a basketball game? Read on to learn about a breakdown of each referee signal and what each one means.

Breaking Down Each Referee Signal

What It Means: When the ball handler takes too many steps without dribbling the basketball, the referee will blow the whistle and call a traveling violation. This will result in the offensive team losing possession of the ball (turnover). The traveling signal is made by the referee by making a rolling/spinning motion with both of his arms.

What It Means: When a team is trying to inbound the basketball, they have five seconds to do so. If the inbounder takes more than five seconds, the referee will blow the whistle. He will then stick out five fingers to signal the five-second violation call.

Carrying (or Palming) the Ball

What It Means: This isn’t called much by officials in college basketball or the NBA but it is called quite a bit during young kids’ games. Carrying happens when the ball handler either palms the ball or tries to scoop underneath it instead of dribbling correctly. The penalty for carrying results in a turnover for the offense.

What It Means: When an offensive player kicks the ball on purpose, the play is blown dead and the referee awards possession to the defense by allowing them an out-of-bounds throw-in. To call a kicking violation, the official simply does a kicking motion with one of his feet.

Over and Back (aka Half Court or Backcourt Violation)

What It Means: Once the offensive team crosses the midcourt line, they are not allowed to go back across it. If they do, the referee will blow the whistle and call an over and back violation. This will result in a loss of possession for the offensive team.

What It Means: An offensive player can only be in the paint for less than three seconds. If he stays in the paint for a full three seconds, the play is blown dead and the offense must forfeit possession of the ball. To make the signal for a three-second violation, the referee will put three fingers up on both hands and keep one arm high and one arm low.

What It Means: When a defender limits an offensive player with his hand, a hand check call is made by the official. The signal is an open hand in the air while the other hand grabs the wrist.

What It Means: When the ball handler runs over a defender who has set his feet and has established position, the referee will call a charging foul. This will result in a turnover and will count as a personal foul to the offensive player. It will also count against the number of team fouls and may result in free throws if the team is over the limit. To make the charging call, the official simply puts his hand on his hand and sticks out his elbow.

What It Means: A defender cannot hold an offensive player. If he does, a holding call will be made. To signal holding, the ref holds his wrist. This results in a personal foul on the defender.

What It Means: If an official deems that a defensive player fouls an offensive player on purpose, an intentional foul is called. This is usually done by a team near the end of the game with the hopes of extending the game by stopping the clock. To make the intentional foul signal, the ref raises both arms over his head and touches his wrists together.

What It Means: When a defensive player stands in the way of the ball handler’s path to the basket without setting his feet, a blocking foul can be called. If a blocking foul is called, the ball handler will get free throws if his team is in the bonus. If the team isn’t in the bonus, the ball will be taken out of bounds from the sideline. To make the blocking call, the official will put both of his hands on his hips.

What It Means: Technical fouls are usually issued for unsportsmanlike conduct. You may have noticed a referee “Teeing” up a coach who yelled too many curse words at him for a bad call. Technical fouls are also called on players who are fighting on the court. To signal a technical foul, the ref simply makes a T with his hands, similar to a timeout signal. When a technical foul is called, the opposing team gets awarded with one free throw attempt and possession of the ball.

What It Means: Pushing is usually called when a loose ball foul occurs. To gain possession one player may push another player out of the way. This counts as a personal foul and a loss of possession. The referee makes a shoving motion with his arms to signal a pushing foul.

What It Means: When the shooter makes a basket but is fouled, the ref must determine if the foul occurred during the act of shooting. If the shooter wasn’t in the act of shooting, the basket doesn’t count. To signal that the shot doesn’t count, the official waves his arms in a fashion that is similar to the “field goal is no good” sign in football.

What It Means: When a team calls a 30-second timeout, the referee lets the scorer’s table know by both of his hands to his shoulders.

What It Means: When the official is ready to start the clock, he raises one hand up and then lowers it quickly.

What It Means: When the referee wants to stop the clock, he raises one hand and keeps it there.

What It Means: To let the scorer’s table know that a player has attempted a three-point shot, the official will hold up three fingers.

What It Means: When a player hits a three-pointer, the ref will raise both hands to signal that it was a successful three-point shot.