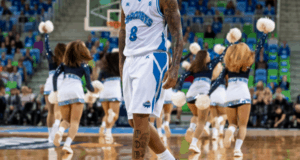 Basketball players are always praising their fans for their support of the team. The most dedicated fans and basketball cheerleaders lead the crowd in cheers, and since basketball fans are very close to the action at games, their cheers are important in helping the team succeed.

There are many types of cheers that are found in basketball arenas, and here are some of the best cheers in the sport of basketball.

Cheers for When Your Team is on Offense

When your team is dribbling the ball down the court, this is the perfect go-to cheer to get the gym rocking.

Take it down (stomp, stomp)

Put it up (stomp, stomp)

Shoot it in (stomp, stomp)

Although the analytics say that 3-pointers are often more efficient than 2-pointers, there are situations that call for getting critical points with a two-point bucket. Here is the cheer for those times.

Here is another cheer to get a two-point basket. This one is longer, but it is a creative cheer. Although the cheer says “two” at the end, I do not see a problem with changing the two to a three since three-pointers are such an important part of the game.

We’re moving towards the basket

We’re headed for a score

We can’t be beat,

So watch us clean the floor…

We’ll clean the floor when we dribble

And then we’ll take a shot

That we’re the best, and this is what we’ve got:

This cheer is an evergreen offensive cheer that can give the team an extra boost to score that possession.

Get out of the way

If you wanna be the best

Better than the rest

When your team needs a bucket badly, this is one of the strong offensive cheers to give that little encouragement to your team.

That sound we love:

Two points on the board

This is one of those short cheers to get the great rally going.

The hoop is open.

The net is hot,

After your team makes its way past halfcourt, this is a very good cheer to help get that great shot.

Dribble the ball to the hoop

Behind the back and loop dee loop

Dribble the ball across the floor

For teams that want to personalize their cheers, here is a one to give the players on the court that little extra support.

Give it all you got,

Although this is not the famous song that includes the line “I like to move it,” here is another personalized cheer to encourage ball movement on offense.

Move it, move it

We don’t want to

Lose it, lose it

Cheers For When Your Team Has Just Scored

Here is a simple cheer to praise the scorer.

Let’s score another one!

After your team swishes a shot, this is a tremendous cheer. Also, you should remember to emphasize the “sh” at the end of swish.

That’s our victory so near!

Cheers For When Your Team Has Brought Down a Rebound

After your team grabs a rebound, this cheer helps start the offensive possession.

We got the ball (clap, clap)

Get outta the way (stomp once)

We’re on the move (clap, clap)

We’re here to stay (stomp once)

Similar to the previous cheer, here is another great way to go from a rebound to a potential fast break going the other direction.

Here is another post-rebound cheer, but with more words – and letters.

Get outta our way!

We want the basketball and we’re here to say:

And win this game today!

That’s the way we spell Vict’ry

Let’s start the defensive cheers with this whimsical little cheer to help make a comeback.

We want that turnover on defense, and here is the cheer to get that ball back.

No (pause) You won’t score

More Cheers for When Your Team is on Defense

This cheer is similar to the previous one, but it is more of an evergreen defensive one.

Here is an original cheer that includes team colors and clapping and stomping.

While this cheer does not actually include roaring, the “roar” of the crowd should come from this amazing cheer.

Go ahead, sit down, you cannot score.

Here we can get the crowd jumping with this cheer during a timeout.

Who rocks the house?

The [team name] rock the house

And when the [team name] rock the house they rock it all the way down.

This is another short timeout cheer to get the fans excited.

We’ve got you beat

We know you just can’t take the heat.

Cheers to Do With The Crowd for Free Throws

Let’s get the crowd into it with this cheer prior to your team’s free throws. While a megaphone is optional, it is recommended.

I say shoot and you say two!