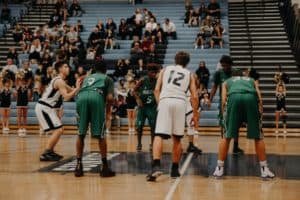 Have you ever noticed that some fouls in basketball are more costly than others? Have you ever wondered why some fouls result in free throws while other fouls do not? It has to do with whether a team is in a bonus situation or not.

What does the term bonus mean in basketball? And how do you achieve that in the game? We give you a simple explanation as well as a guide.

What Does it Mean When a Team is in The Bonus?

For each quarter or half of a basketball game, each team is allotted a certain number of fouls. Once the team reaches their foul limit, their opponent is considered to be “in the bonus”. Here’s a further breakdown of how the bonus works.

Any other type of fouls (loose ball fouls, illegal screens, offensive fouls, etc) only results in free throws if a team is in the bonus. A team that is in a bonus situation has a distinct advantage over a team that is not in a bonus situation. Different levels of basketball have different bonus rules, which we will discuss in further detail below.

In the Bonus: NBA vs. NCAA vs. High School Rules

In high school hoops, each team’s foul limit is six per half before the bonus rule is awarded. Let’s say a team commits its seventh foul of the first half. The opposing team is awarded a free throw since they are in the bonus.

The bonus rule for college basketball is similar to the high school bonus rule. Each team is allotted six fouls to give per half before the bonus rule goes into effect. Just like in high school, college players are awarded a one-and-one free throw situation if their team is in the bonus.

NCAA women’s basketball is a bit different because they play quarters instead of halves. For women college hoopsters, each team is allotted four team fouls per quarter before the bonus kicks in. In both men’s and women’s college hoops, offensive fouls do not count towards the team’s number of fouls.

The NBA does its bonus rule a bit differently from high school and college basketball. There is no one-and-one rule in the NBA which means that once a team reaches the bonus, they are awarded two free throws each time.

Each team has four fouls to give per quarter. After the team commits their fifth foul of the quarter, the opposing team enters the bonus.

Here is another way the bonus rule is different in the NBA. Once there are two minutes remaining in a quarter, the bonus rule applies after a team reaches their second foul. This happens regardless of how many team fouls were committed during the quarter of play. In any overtime period, the bonus rule gets applied once a team goes over three fouls.

What is Double Bonus in Basketball?

The double bonus is enforced when a team goes over the second limit of team fouls in a half. For example, in both high school and college basketball, the bonus starts when a team commits their seventh foul of the half.

Why is Knowing Your Team’s Bonus Situation Important?

Smart basketball players and coaches are always in tune with the overall flow of the game. A team’s entire game plan can change based on the bonus situation. As a coach, don’t just rely on the scoreboard either. Have an assistant coach keep up with your team’s fouls and your opponent’s fouls.

Here are a couple of different scenarios that show why it’s important to know how to use the bonus rule to your advantage:

Scenario #1: Defensive Strategy With Fouls to Give

If your team has plenty of fouls to give for the half, this is a great opportunity to crank up your team’s defensive intensity. Tell your players to go for more steals and not be afraid to get a little extra physical on the defensive end. Use those fouls to give wisely and try to create turnovers that lead to easy layups.

Scenario #2: Offensive Strategy While in the Bonus

If your team just entered the bonus or the double bonus, this can be the perfect time to make some player substitutions. Consider putting only your best free throw shooters on the court. This will increase your team’s free throw percentage and allow you to make the most of the bonus situation.

Have your team practice free throws on a consistent basis! Remember that the bonus rule does your team no good if they are constantly missing free throws. Championship teams know how to knock down free throws in the clutch!