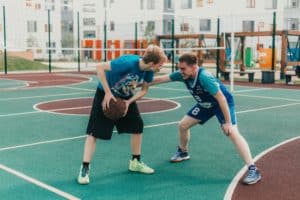 When I first started playing competitive basketball, I had trouble with either traveling violations or getting the ball stolen. This happened because I didn’t fully understand how to properly pivot. Thankfully after a couple of years, I was put on an Amateur Athletic Union (AAU) team with a high-level coach who taught me the right drills to perfect the fine art of pivoting.

Are you or your team newer to the hoops game and wanting to improve pivoting techniques? Use these three drills to learn how to pivot, drive, and complete various dribbling moves for basketball. These drills will help you or your team achieve a higher level of success on the hardwood.

This drill is perfect for players who are new to basketball or who aren’t yet comfortable pivoting. Mastering the four basic pivot moves will make any player more fundamentally sound, regardless of size or position. Here’s a quick breakdown of the drill.

This was an illustration that helped me better understand the pivoting concept as a player. Sometimes all it takes is a different explanation from the coach for it to “click” inside a player’s head.

Here’s an excellent drill for players to work on their jump stop move, their pivot, and their passing technique all at the same time. The jump stop move will help throw the defender off balance and create space for the ball handler to either drive, shoot, or pass. Here’s how the drill works.

After each player has completed this drill, have your team do the mirror version of it. This means that they’ll now dribble with their left hand and pivot off their right foot. This drill can be done as a warmup to promote great footwork and agility.

This is a great drill for low post players to help them improve their game as offensive players. The drop step is one of the most powerful moves in basketball because it creates separation from the defender and often leads to an easy layup. Here’s how to get your players to run the drop step drill.

Sure, the drop step is primarily for power forwards and centers to master, but have your small forwards and even your guards practice it as well. You never know when your big post players will get into foul trouble, so every player on your team must know how to use the drop step.

You want your entire team to learn all of the fundamentals of basketball. No one can become a great player without mastering the fundamentals. Learning the proper drop step is a powerful weapon in any player’s arsenal.