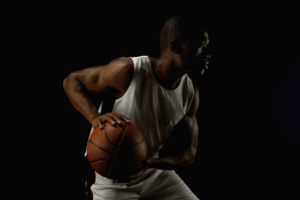 I’ll never forget my first lesson on defending the triple threat position on the basketball court.  I was a post player and the other team got the ball down low on the block to the player I was guarding.  He kept the ball just far enough away where I couldn’t reach it.

Without dribbling or picking up his feet, he pumped faked and caused me to go airborne.  He then dribbled all the way down the baseline to the hoop for an easy layup.  That embarrassing experience taught me that the triple threat position is extremely difficult to defend.

To learn more about the triple threat position and how you can use it to your offensive advantage, keep reading.

What is The Triple Threat in Basketball?

The triple threat (also known as the triple attack) is a highly effective athletic position that basketball players use on the offensive side of the court.  To get into the triple threat position, the player with the ball must keep their knees bent to allow for explosive movements. The player’s weight must be on the balls of their feet and not their heels.

The ball must be held near the player’s hip so that the defender can’t steal it. Having the ball near the hip also puts the player in a good position to shoot the ball if the defender is too far away.

To make the triple threat position even more beneficial, the ball-handler should have one foot out further than the other one.  This helps to further protect the ball and allows the ball-handler to see more of the floor and their teammates.

Why Should You/Your Players Learn The Triple Threat Stance in Basketball?

Basketball players of all ages should learn the triple threat position as soon as possible in their careers because it is arguably the most dynamic offensive position in the game.  The triple threat position is one of the basic fundamentals that players must learn if they want to play the game at a higher level.  Players can’t fully develop their basketball skills until they have mastered the fundamentals.

Does The Triple Threat Position Work?

So much of being a good offensive basketball player is about keeping the defender guessing.  The triple threat works so well because the defender simply doesn’t know what move the offensive player will make.

Defending Against the Triple Threat Position

Hopefully, you learned from my personal example above to never bite on the head fake when you are guarding a player who is in the triple threat position.  Trust me, keeping your cool and not being overanxious will serve you well on the defensive end of the court.

Besides watching out for head fakes, here are a few more tips to help you defend the triple threat.

1.  Play and Practice Defense With Intensity

Too many young kids and even coaches seem to focus too much on offense and not enough on defense.  By playing and practicing defense with intensity, you’ll be on your way to becoming a better all-around basketball player.  The key is to always keep a champion’s mindset.

2.  Stay in an Athletic Position

If the player you’re guarding goes to shoot the ball, try to block the shot.  At the very least, make sure you challenge the shot, get a hand in their face, and get into a good position for the rebound.  You never want to give your opponent an uncontested shot.

If they dribble, explode from your stance and stay with them.  Get up a bit closer to them and never give them a clear lane to the basket.  Also, make a few swipes at the ball to steal it.  Be careful not to foul them though.

If they pass the ball, react quickly to steal the pass or at least knock the ball out of bounds.  Anticipating a pass, stealing the ball, and dunking it on the other end is a gratifying feeling!

6.  Know the Player You Are Guarding

So much of playing good defense is about knowing your opponent.  If you’re a post player and the player you’re guarding hasn’t shot from the high post all game, you can bet they probably won’t shoot from a long distance.  This will allow you to focus on the scenarios of defending their passes and dribbles when they’re in the triple threat position.