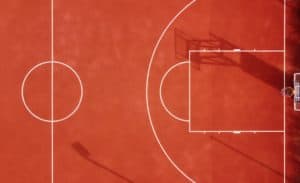 Basketball is an exciting game, but it can be intimidating when you’re first starting. There are so many complex rules and positions that it can be overwhelming. Keep in mind though that every basketball player started right where you are.

A basketball team is often made up of 12 to 15 players. However, only five players from each team can be on the court at the same time. Coaches can swap out players (aka player substitution) only after a stoppage of play has occurred such as a foul call, timeout, or an out-of-bounds call.

Each basketball game begins with a tip-off. This is where usually each team’s tallest player, oftentimes the center, will jump as high as he can to tip the ball to his teammates.

The team with the ball is called the offense. The goal of the offense is to move the ball down the court by passing or dribbling and shoot the ball into their opponent’s basket (often referred to as the “rim”).

The team without the ball is called the defense. The defense’s main job is to keep the offensive team from scoring. The defensive players will try to do this by stealing the ball, blocking the offense players’ shots, and rebounding missed shots.

Traveling / Walking: If a player takes more than one step without dribbling, traveling will be called and the referee will award the ball to the other team. Traveling also happens when a player quits dribbling and then moves his pivot foot.

Jump Ball: When players from opposing teams are fighting for a loose ball, sometimes both of them will end up holding the ball at the same time. Officials will blow the whistle and call for a jump ball. Whichever team has the possession arrow will be awarded the ball. (Note: In the NBA, both players who were fighting for possession do a jump ball which is the same as the opening tip-off)

A basketball court ranges in length from 74-94 feet, depending on the league. Junior high and younger often use a 74-foot court while both college and the NBA play on a 94-foot court. The court is a rectangle and there is a basketball hoop that is 10-feet tall on both sides.

The court is cut into two sides by the half-court line. Each side of the court has a three-point line (aka three-point arc), a free throw line, and an out of bounds line. Indoor basketball courts are made out of wood, hence the phrase “the hardwood”. Most outdoor courts are made of asphalt or concrete.

Each team has two guards, two forwards, and a center. Here’s a quick breakdown of each position.

Point Guard: The point guard is usually the team’s best ball handler. This player is skilled at dribbling, passing, and running the offense. Most point guards also play a crucial role in team leadership. Oftentimes, the point guard is the shortest player on the team.

Shooting Guard: The other guard position is called the shooting guard or off guard. Most of the time, this player is the team’s most gifted shooter.

Small Forward: This position is often referred to as the wing position. This player is a jack of all trades who is skilled at shooting, passing, and rebounding.

Power Forward: The power forward plays down on the block with the big boys. This player normally doesn’t shoot from long distances but is skilled at rebounding and scoring from close range.

Center: Centers are often the tallest player on the team. They are asked to handle the tip-offs at the start of each game. Because of their height, centers are often adept at rebounding and shot-blocking. Many centers are also top-notch scorers.

A standard regulation-size NBA basketball is 29.5 inches in circumference. Basketballs are made out of a combination of leather and rubber materials. The inside of the ball that holds the air is called the bladder.

Dribbling is one of the most important basketball skills. It involves bouncing the ball as the player moves up the court. Like we discussed before, a player cannot dribble with both hands at the same time (double dribble).

Once players get good at mastering the basics of dribbling, they can work on dribbling behind their backs or between their legs. These moves will keep defenders off balance and not as likely to steal the ball.

When a shot is missed, players will rush to try to take possession of the basketball. This is called a rebound. Rebounding requires a certain level of tenacity and physicality.

To be an elite rebounder, a player must become excellent at “boxing out” an opposing player. Boxing out means getting into a better position for a rebound by using your body to move another player out of the way.

Basketball players have to find an open teammate to pass the ball to when heading up the court. Passing is often one of the most underrated aspects of the game.

Players must work to perfect the bounce pass, chest pass, and no-look pass (advanced players). Executing a perfect pass will often give your teammate an open look at the basket.

Shooting is arguably the most important part of basketball since it’s how a team scores points. Basketball players practice shooting more than any other part of their game. There are many different types of shots.

Jumpshots are when the shooter elevates over the defender to get a clear look at the basket. It takes a great deal of practice to become an elite jump-shooter. Layups are shot close to the hoop and are the easiest way to score points.

To get three points, a player must make a basket (also known as a field goal) from behind the three-point line. Since it’s so far from the hoop, a three-pointer is one of the lowest percentage shots a player can take.

When a player is fouled while shooting, he is rewarded by getting free throws. Free throws must be shot from behind the foul line. A player has 10 seconds to shoot a free throw or a violation will be called.

Defensive players cannot illegally hack, slap, bump, or hit an offensive player while he is in the act of shooting. When this happens, a foul is called and the shooter gets free throws.

Each player is allowed 6 personal fouls (5 for college and high school) before fouling out of the game.