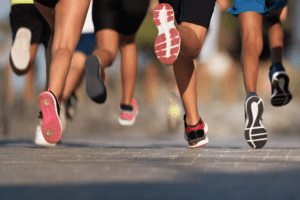 You may be thinking to yourself…

“How could basketball shoes NOT be good for running?!”

Isn’t half of the game running around to an open spot on the basketball court, or running back on defense to make sure the player you’re guarding doesn’t get an easy bucket?

The answer to that is a resounding yes. If you’re not running during the game, you’re probably not doing yourself or your team very much good.

So once again, how does it make sense that basketball sneakers (a product made for a game predicated on running) are possibly not good enough for jogging around?

In this article, we’ll look at basketball shoes’ viability as running shoes, and whether or not it makes sense to wear your hoop kicks while trying to boost your level of cardio conditioning.

Before we get into the differences between the two types of footwear, it’s important to think about what makes the game of basketball different from traditional running.

Despite the tongue and cheek rhetoric in the introduction of this piece, basketball involves a lot more than just running. There are a ton of sudden changes in the sport that require players to stop on a dime, go from right to left, shift weight from one foot to the other, and so on.

By design, there are obstacles in your way when trying to get to the hoop, and you want to be a formidable hurdle against an offensive player who isn’t going to make your life easy by standing still. In addition to moving straight ahead or back-peddling, you’ll also be moving laterally quite a bit in order to cut off certain angles.

If you’re going for a run on a treadmill or outdoors, the nature of the movements doesn’t quite imitate the ones basketball players make consistently. Runners aren’t really making hard plants on one foot at the track at your local park in order to reverse course and run in the opposite direction.

While there may be some contour variances when running on asphalt, dirt, rubber, or concrete, there are very few scenarios where a runner is simulating running around a screen set for them on an imaginary basketball baseline. Runners are also not jumping in the air in order to sky for a rebound or block a shot.

With that frame of reference in mind, delving into the unique attributes of a pair of basketball shoes versus a running shoe now makes more sense.

Basketball shoes have a little extra weight and tend to engulf your foot. That’s absolutely by design, as basketball sneakers are made with ankle support and the ability to burst in short sprints as a primary consideration.

They have undergone a bit of a transformation in the last decade or so, as now companies feature mid-tops and low-top basketball shoes as well as the classic high-tops. With that said, basketball sneakers still come up higher than running shoes, and they are also designed to perform well in the traction and grip department.

On the other hand, running shoes tend to be much cheaper from a cost perspective, and they’re also much more lightweight and flexible. That’s pretty logical considering that runners looking to run long distances don’t necessarily want to feel bogged down by something that’s swallowing up their entire foot.

For the most part, running shoes have a lot of flexibility, but the construct changes when we’re talking about running on some alternative surfaces. A trail running shoe is generally recommended for runners taking their talents off-road.

This family of footwear tends to get closer to the characteristics of a basketball shoe, but still doesn’t quite approximate them. Trail running shoes are a little bit sturdier than their basic running shoe counterparts, and have increased traction to remain firm in the presence of mud and gravel.

If we’re looking in the mirror and reflecting on our exercise patterns with scouts-honor level honesty, most of us can probably admit that we’ve gone for a jog or three with traditional basketball shoes. It may not add up for people to go to a different pair of sneakers during a run when they know that their basketball kicks have been sufficiently broken in.

The mental calculus of that is sensible. If a player’s comfort with a pair of basketball shoes grows with each time they’re plucked off of the shelf, it’s hard to emotionally turn away from that even in a different context.

For short distances, wearing basketball sneakers can be a good option. With the amount of cushion basketball shoes tend to feature, they can provide a pleasant level of comfort on a morning scamper or evening run.

Even though they tend to be a bit clunkier than running shoes, the padding inside of basketball sneakers might motivate a person to run a bit more than they had originally planned. This bonus bit of exercise can add up over time, helping players reach a tier of fitness that exceeds that of their competitors.

A lot of people like to vary their workouts, which can be an indirect invitation to bring out their basketball shoes. Some programs will include straight-line running, but might also include squats, wind sprints, burpees, and other types of routine exercises that cross-train your body.

If you anticipate that you’ll be doing something to this effect, your basketball shoes might handle the intensity of a workout like that better than your average running shoes.

Your foot won’t fall off if you ever do elect to go for a run wearing basketball shoes. Just have a look at the plethora of folks running around your park in nicer weather, and there’s an excellent chance you’ll find someone jogging in basketball kicks.

We touched on it earlier, but basketball shoes aren’t designed for long-distance running and can serve as an impediment if you’re looking to complete an extended route from your house to the sporting goods store in the next town over.

There’s an increased likelihood of fatigue, and potential moisture buildup in your basketball sneakers if you take them in a long run. Running shoes generally cover your foot, but not much of your ankle, which tends to allow air to better surround your pavement-pounding hooves.

In addition to the reasons stated above, scientific reasons also support runners not deploying basketball shoes. During a straight-line run, the bulk of the impact upon landing is concentrated at the forefoot and heel.

Running shoes are generally much better equipped to absorb shock in these particular areas. There is some overlap in basketball if a player is sprinting down the floor to convert a layup or block a shot, but relatively speaking, basketball shoes don’t do the best job of protecting the wearer from consistent impact in that aspect.

In some cases, running in basketball shoes can cause nagging injuries such as plantar fasciitis. Regardless of the activity, an athlete participates in, plantar fasciitis is an absolute buzzkill of an ailment, as more basic activities such as walking around your house can suddenly become a more painful task.

The risk of possibly irritating the plantar fascia may not be a wise gamble considering the debilitating effect it can have on your workout regimen and your regular life as well.

So… Are Basketball Shoes a Good Substitute for Running Shoes?

All things considered, basketball shoes are an acceptable alternative to running shoes. They aren’t necessarily the preferred selection given some shortcomings of basketball sneakers relative to other options, but going for a jaunt in them isn’t going to be an egregiously bad decision.

Keep in mind that the mileage you put on basketball shoes for traditional cardio exercises might lead to their demise a bit more quickly than if they were strictly used on the hardwood floor. In addition to the several benefits of wearing running shoes for traditional running, this can be another factor to ponder when you examine the choices on your shoe rack.