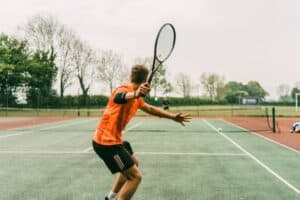 People are always talking about getting into better physical shape, which can involve taking up new sports. Selfishly, we’re hoping that many folks hit the indoor courts or the outdoor courts in order to fall in love with basketball.

But we realize we can’t be too picky here. Maybe you’re interested in playing a different sport to increase your level of cardio conditioning, like tennis.

That would work too, but you’re probably wondering whether those basketball shoes you received over the holidays can be re-purposed for a tennis match.

Before you awkwardly approach the relative who purchased the pair of shoes to see what the return policy is, let’s take a deeper dive to find out whether basketball sneakers would hold up well enough on a tennis court.

Before we get into the feasibility of using shoes designed to play one sport for competition in another, let’s first understand what makes most basketball shoes different from tennis shoes.

We can start by literally picking up both pairs of shoes in either hand. It’ll be pretty apparent that basketball sneakers tend to be heavier shoes, while footwear made for tennis tends to result in lighter shoes.

Additionally, basketball shoes mostly tend to be high-tops, which offer more in the way of ankle support. Traditional tennis shoes typically don’t do that, as their low-top style just covers your feet.

Another variance between the different types of shoes involves the level of padding. You’ll find much more cushioning in a basketball sneaker than a tennis shoe, and that’s because of the nature of the movements basketball players make.

Basketball players run in every direction and jump during the course of gameplay. Tennis players’ movements are a bit more limited, and they aren’t subjected to jumping during every sequence when the ball is in play.

Last, but certainly not least, is the difference between the bottom of each type of shoe. For the most part, basketball shoes utilize a herringbone design on their soles.

Tennis shoes have soles that vary based on the surface the match is played on. While basketball shoes can also be scrutinized based on whether they’ll be used for indoor or outdoor play, tennis offers a few more flavors such as hard courts, grass courts, or a clay courts.

The sole of a tennis shoe can be smoother or contain a similar herringbone pattern to its basketball footwear counterparts. It all depends on the surface it was made for. 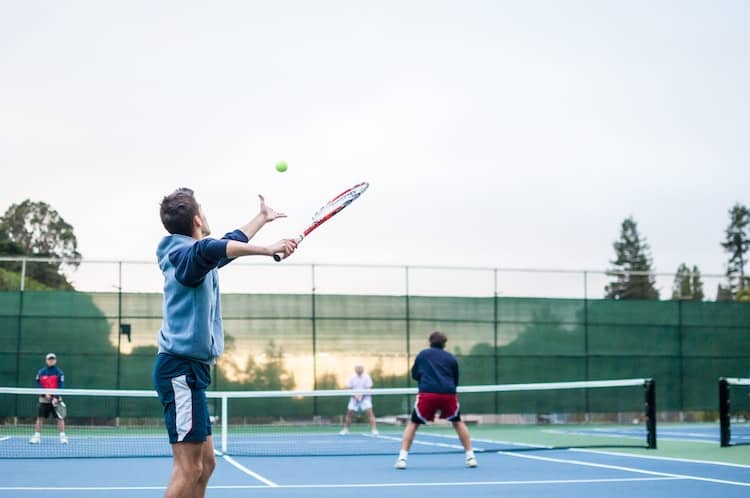 The primary benefits of using basketball shoes to play tennis include:

Re-purpose enthusiasts, multi-purpose fans, and resourceful readers rejoice. You have a pair of basketball shoes and aren’t particularly interested in buying a pair of athletic sneakers specifically for tennis.

There have to be some redeeming qualities that shoes made for hoops have on a tennis court, right?

For one, basketball sneakers have extra cushioning compared to a lot of other footwear, and the main reason for that is the constant leaping that hoopers do. There’s a lot less jumping in tennis than there is in basketball, but the latter sport isn’t completely devoid of players leaving their feet.

There are at least two situations where players leave their feet.

When tennis players serve, they throw the ball up in the air and strike the ball hard with their racket while getting off the ground.

Some players jump higher than others, but it stands to reason that foam and other basketball shoe-specific technologies designed to pad the impact of the landing can help tennis players feel a level of comfort when they hit the ground.

Additionally, sometimes tennis players will try to volley a shot over an opponent who has come up close to the net. When successful, this forces the opponent to sprint back to their original position in hopes of returning the shot.

Sometimes, an opponent might want to jump high enough to reach that arched shot in order to avoid that extra running. If they’re able to get into the air high enough, they can smash the ball back at their opponent and win the point.

Give careful consideration to the type of playing style you’ll deploy in a tennis match, and that can help you figure out whether wearing basketball shoes is the right move.

On the other hand, the downsides to wearing basketball shoes for tennis are:

Using a product meant for a different discipline comes with its fair share of concerns. There are a couple of reasons why you might want to steer clear of wearing basketball shoes while playing tennis.

We delved into how a certain type of tennis player might actually want to wear basketball shoes to compliment their high-flying game. The converse of that scenario also exists, where basketball footwear might actually serve to hinder a player’s effectiveness.

As we outlined earlier, basketball shoes are heavier and bulkier than traditional tennis shoes. They’re designed to catch your ankle in case a player steps on someone else’s foot, which happens often in hoops.

In tennis, there’s virtually no chance of that happening, so the need for footwear that devours your foot and ankle isn’t there. Playing multiple sets in a large sneaker can leave a tennis player running on empty toward the end of a match.

The additional weight of a basketball sneaker can slow down a tennis player on a point-to-point or set-to-set basis. If tennis players can’t effectively get to returned shots, then the game is over before it even begins.

There’s another practical reason why wearing basketball sneakers to a tennis match might be a little unsettling.

Think about the time and testing that goes into creating athletic footwear, for basketball or any sport. Manufacturers want to make sure that the shoe will hold up in the traditional environment that it’s exposed to.

With that in mind, can we honestly say that basketball shoe-makers are spending extensive time ensuring that their creative works well on clay and grass? That’s quite a reach, considering that basketball isn’t usually played on those surfaces.

The shelf-life of your basketball shoes, which you still might actually want to use to play basketball, might be dramatically affected if you use them to play tennis in these different settings.

So… Are Basketball Shoes a Good Substitute for Tennis Shoes?

There are many things you can do in life. Sure, you could wear your pajamas to class or to your place of employment and let the chips fall where they may.

But does that make it a good idea?

While the example above might be somewhat comical in nature, the point remains that there are crazier ideas than wearing basketball shoes to play tennis. Despite weighing the pros and cons outlined above, there could be other factors guiding your decision, such as the lack of flexibility to pay for separate tennis shoes.

The road map to convince oneself that wearing basketball sneakers to play tennis is a pretty logical one. Both sports involve lateral movement, direction changes, and sudden stops, which may lead any reasonable person to conclude that the same type of footwear can be used for both sports.

It’s hard to argue with the similarities presented in that fashion, but it’s still probably not ideal to grab your racket while donning basketball sneakers.

The chances that something dire will happen to you if you do this don’t seem all that high, but the amount of effectiveness that one might hope to have on a tennis court might be notably hindered by the construction of basketball shoes.