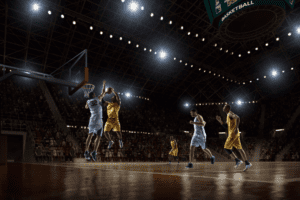 Have you ever been in a position where you knew what you wanted to say, but couldn’t come up with the words to say it?

It’s a situation people find themselves in way too often. We’re not going to let our teammates down in the world of basketball vocabulary, though.

Here are 20 words to keep in mind that’ll help you describe a wide-ranging set of people and objects related to the game of basketball.

Adjectives for a Basketball

This alludes to a basketball that doesn’t slip out of your hands when you’re trying to dribble it. Before a game, players and officials will test out basketballs to ensure they have a proper grip.

A basketball is flat when it’s running out of or has run out of air. You can try to dribble a flat basketball but it won’t come back up to you.

The color most identified with the basketball itself. The second most popular color for basketball is brown.

A basketball is meant to be bounced onto the playing surface as a basic rule of the game. Certain basketballs can bounce higher than others if they are filled with a lot of air, and can be called bouncy.

Adjectives for a Game of Basketball

This describes a game that has a lot of fouls called. There isn’t continuous action due to whistles blowing that stop the game.

A rugged game refers to a contest where players aren’t afraid of contact, and are racing to the basket to grab rebounds.

The opposite of choppy, a flowing basketball game describes a tilt that has constant movement. The ball is being passed around unselfishly, and one player isn’t the center of attention.

This refers to how well the players are playing. If it looks like teams are executing their game plan to perfection and appear to be well organized, then the game can be described this way.

A basketball game that doesn’t count for official records. People who have no defined affiliation with one another can form a team in a pick-up basketball game.

Adjectives for a Basketball Player

A player who doesn’t get nervous when things don’t go their way. Someone who remains calm and continues to play through adversity.

A player who uses moves that aren’t commonly seen. They see the game differently and use creative ways to play effectively.

A player who plays the game utilizing traditional footwork and technique. Someone who has mastered the basics of the sport.

A player who doesn’t sit back and wait for things to happen. This person might doggedly chase the ball, or drive the ball to the basket to score points.

Usually used to illustrate how someone plays defense. A pesky defender might try to guard someone for the entire length of the court or do legal things that throw another player off their game.

Adjectives for a Basketball Court

A basketball court that is wet, or not properly cared for can be slippery. It can be difficult for players to find their footing, and they may fall often.

A court that can be played on by anyone as long as it isn’t occupied. You don’t have to pay money to play on a public court.

A court that features the required dimensions for a certain level of basketball. A regulation-size NBA court is just over 91 feet long and 49 feet wide.

A court that doesn’t have any players on it. If a court does have players on it, you’ll have to wait until they finish their game.

A court that has a level rim clearly painted lines, and a full net is well-maintained. It looks like someone put effort and attention to make the court look nice, and keeps it dry so no one slips.