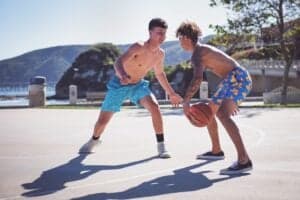 Unlike other major sports which require headgear or caps to cover a player’s head, basketball lets fans get a full view of each athlete’s dome. Basketball players are often closely linked with the hairstyles they choose to rock on the court.

For example, it’s hard to separate Allen Iverson from his trademark cornrows, or Julius Erving from his notorious afro. The hair fashionista in all of us pays special attention to each player’s look, which can help drive their popularity as well from a marketing perspective.

Since follicles are the topic of the day, let’s comb through (get it?) the best present and past NBA players with curly hair.

Whether he was an underclassman at Stanford or a 15 year NBA veteran, the curly locks have been a staple of Robin Lopez’s brand.

He’s been a rotational big man for the better part of his career and will look to serve as a veteran presence for a young Cleveland Cavaliers team this season.

When he was a young player with the Los Angeles Clippers, DeAndre Jordan switched things up from a hairstyle perspective. Regardless of which coiffe he went with, he was a high flying dunker that made an impact during the Lob City years in the 2010s.

Jordan is on the Denver Nuggets’ roster, and will look to provide some backup minutes should the team’s frontline experience injuries. As an older player, he’s decided to let his curls do their thing.

He’s New Zealand’s finest and is regarded as one of the most enjoyable guys to play with in the league. Over the course of his career, Steven Adams has gone from a relatively conservative look to an extremely rugged one.

His long hair, coupled with his toughness in the paint helped give him an edge. The Memphis Grizzlies will likely keep him in the rotation this year while Jaren Jackson Jr. recovers from a foot injury.

Kelly Oubre, or Tsunami Papi as he’s known in some circles, has turned into a pretty solid player during the course of his career. He does a good job in a complementary role off the ball, playing around 25 minutes a game.

If Miles Bridges doesn’t come back to the Hornets, Oubre may take on a larger responsibility offensively.

It’s impossible to keep twins apart in most walks of life, which means that Brook Lopez has to make an appearance on this list. At certain times he’s had really short hair, and at other points, he’s let his curly hair roam free.

His game on the floor has also evolved. He used to be a post-up player with the Nets early in his career, and now is a floor spacing champion with the Milwaukee Bucks.

Thanks in large part to his father Lavar, LaMelo Ball has been in the public eye since he was a teenager. To his credit, he has handled the attention extremely well and has met the lofty expectations placed on him by those inside and outside of his circle.

The budding NBA star has proven to be one of the most exciting players in the league in his first couple of seasons. Ball hopes to get the Hornets into the top six seeds in the Eastern Conference this year.

With curly hair fluttering in the arena breeze, we find Atlanta Hawks point guard Trae Young topping the list. Whether it’s a hesitation move meant to freeze the defender, or a three pointer being launched from 35 feet, Young’s hair always seems to be moving in some sort of direction.

The Hawks made it to the Eastern Conference Finals in Young’s third season, which is a place Atlanta hopes they can get back to soon.

After a notable career at the University of Arizona, Luke Walton came into the NBA playing for a contender right away. It’s not always easy to join a team featuring Shaquille O’Neal and Kobe Bryant as a rookie, but Walton’s team first mentality helped him contribute.

He spent nine seasons with the Los Angeles Lakers before finishing out his career with the Cleveland Cavaliers. Walton has also been an NBA head coach.

One of the most memorable ‘do’s in NBA history belonged to Anderson Varejao. He was never the most skilled player, but he would leave everything he had on the floor.

Varejao endeared himself to the fans as he dove for loose balls, and provided maximum effort every night.

Speaking of hustle and energy, Joakim Noah was the epitome of effort dating back to his college days at the University of Florida. His desire to win and fill up the box score was palpable during his early years with the Chicago Bulls.

Although he battled some injuries later in his career, Noah had a stretch where he was one of the better centers in the NBA. He also had a knack for setting up his teammates, averaging a career high 5.4 assists in 2013-2014.

The apple usually doesn’t fall far from the tree, as Luke Walton’s curly hair was passed down to him from his father Bill. The elder Walton had a remarkable college career at UCLA and won a title with the Portland Trail Blazers in just his third season.

After missing a lot of time due to various injuries, Walton resurfaced with the Boston Celtics in 1986 to win another championship as a reserve contributor.

Perhaps no player combined style and skill better than Pete Maravich. As a child, he and his father Press would spend hours working through dribbling and shooting drills.

Maravich had exceptional range as a shooter but largely played in an era that didn’t feature a three point line. It’s fun to imagine how much his career scoring numbers would’ve been bolstered.

Even though rivals of the Dallas Mavericks are rooted against their success, there aren’t many people who didn’t enjoy watching Dirk Nowitzki play. At seven feet tall, his ability to bring the ball up the floor and pull up for three without hesitation was truly a breathtaking sight.

In terms of pure skill, Nowitzki would dazzle fans with one legged fadeaways and high arching swishes for over two decades.

The Boston Celtics dominated the 1960s and had success in the 1970s as well, and John Havlicek was a major reason why in both decades. He was a 13-time All-Star who could do it all offensively and defensively.

Havlicek was on a team that won the NBA title eight times in his career and was inducted into the Basketball Hall Of Fame in 1984.

The most accomplished curly haired player in NBA history was Larry Bird. From the moment he entered the league in 1979, he transformed Boston from a struggling cellar dweller into a perennial powerhouse overnight.

Bird scored over 21,791 points in his career, and led the Celtics to three NBA championships in the 1980s. His style of play helped bring the league to new heights and set the stage for an increased popularity in the decades that followed.