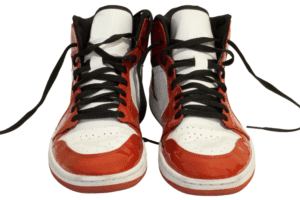 The great thing about basketball is that it doesn’t discriminate. It doesn’t matter where you come from, what your body type is, or how you came to fall in love with the game.

That’s why the audience with wider feet shouldn’t get down on themselves, as it’s absolutely possible to become a superstar with the hooves you’ve got. The trick is finding the optimal pair of basketball sneakers that’ll provide the level of support for the width of your feet, since not all of the top basketball shoes are designed with this consideration.

If you were already on the court but were having trouble with soreness, or were reticent to get on the floor because of your wide feet, your life is about to change for the better.

Factors to Consider When Purchasing Basketball Shoes for Wide Feet

The breakdown provided here looks to check baseline boxes but also provides options that will help boost the performance of wide-foot athletes.

One of the biggest challenges for this demographic is comfort. Many shoes are just too narrow and crowd the sides of your feet.

This tightness puts unnecessary pressure on these areas, and players sometimes choose the path of least resistance during the game because their feet are in such bad shape. This list prioritizes that solace for your feet, so you’re comfortable throughout the competition.

Price points are also important, as we know all too well that holiday budgets stretch in directions many people least expect. It’s not necessary to break the bank to find suitable solutions for your wide feet. But if you do, you can feel confident that the purchase will bolster your ability to shine as a basketball player. As LeBron James continues his ascent toward the very top of the all-time career scoring list in NBA history, your feet can also get in on the upswing with a pair of the best basketball shoes out there. The LeBron 19’s are the premier selection for players with wide feet, and you might not want to take them off even after the game ends.

For once, you can rejoice with these wide basketball shoes, as the attention paid to player comfort in these sneakers is tremendous. It’s got a soft midsole and features Nike Air Units in the front and the back of the shoe.

Many sneakers focus on building up one area with supreme cushion, but the full-length padded coverage in this shoe is impressive.

One potential downside to consider with the LeBron 19’s is its pricing and average traction. It’s a bit on the steep side relative to other sneakers, and may not grip the playing surface as well as other shoes. There’s currently no such thing as a game 8 in a basketball playoff series, and Damien Lillard’s Dame 8 also stretches the imagination when it comes to what’s possible in the sneakerverse. These are the right pair of shoes for players who can’t wait to hit the court with their new kicks.

One of the great things working in the favor of the Dame 8’s is that these sneakers need very little time to be broken in. They’ll feel like they’ve been pivoting, sprinting, and jumping along with you forever, within your first couple of games with them on.

The Dame 8 also has a unique technology solution called BouncePro, something Adidas has released relatively recently. It straddles the line between providing firm support for your feet, while still being soft enough to maintain a comfortable feel.

The only potential concern here pertains to the traction, which can be less than ideal on outdoor surfaces or dusty indoor courts. Standing at a robust 7’0” and 280 pounds, Philadelphia 76ers center Joel Embiid is a gargantuan human being. As one might expect, he’s got a sizeable pair of feet that keep him chugging along up and down the court.

His signature shoe, the Embiid 1’s, is a favorite amongst players who play in the low post and have wide feet. They’ve got mesh uppers that allow your feet to breathe, so they’ll remain cool late into the fourth quarter.

While providing that additional width to accommodate your feet, the Embiid 1’s also compliment your feet with a thick sole and the ability to manually customize how tight your shoe fits.

Embiid’s first signature sneaker is also well-regarded for providing ankle support. The one downside of the shoe is that it takes a little while to break in, so you might want to first deploy them in a casual scrimmage or shootaround settings initially. Nike Jordan Why Not Zer0.4 Check Price on Amazon

Don’t let the intriguing naming of these sneakers fool you. This shoe is a signature offering inspired by Russell Westbrook, and shouldn’t be viewed as a last-ditch indifferent purchase for any player.

Based on some of the important things we look for, it can be considered a jack of all trades. It has a respected cushioned bounce element to it, thanks to the presence of zoom units in the forefoot.

It also has really solid support and reigns supreme when it comes to lateral stability, which comes into play a lot on defense. The back of your foot locks into place via the heel counter as well.

Be sure to pay consistent attention to the bottom of the shoes to ensure their cleanliness. Like some of the other sneakers on the list, the Why Not Zer0.4’s can be hit or miss with regards to traction, and mostly miss if they are dirty. Adidas makes another appearance on this list with its OwnTheGame footwear product. It’s got an Adiwear outsole that enhances the level of traction the shoe provides.

The interior of the shoe is where we find both its pros and its cons. The OwnTheGame has a mesh tongue and padded collar, which provides a nice soft enclosure at the top of your foot.

Despite this comfortable approach to holding your feet in place, the breathability of this shoe isn’t the best. In between games, or during pauses in the action, you might feel inclined to take these off to give your feet some fresh air.

All in all, it’s not a bad idea due to its appealing price point and durability, but it has its minor flaws. As we’ve seen with other offerings on this list, don’t let the lack of player name value turn you away from a product. The Beita High Upper Basketball Shoes are a solid go-to for wide-foot players at a price that’s pretty unbeatable.

Support for your lower extremities is the name of the game with this shoe. It’s designed with protection and safety in mind and does a great job of securing your foot in place while keeping your ankle stabilized as well.

The breathable mesh also makes for a ventilated experience for your feet.

The two possible cons to consider with the Beita shoes are that they may not be as comfortable as some of the other choices, and it isn’t available in a ton of sizes. Do you hear that sound? That’s the audio of your wallet thanking you for going easy on it, while still bringing a legitimately strong pair of sneakers home.

The Puma TRC Blaze Court comes at an affordable price tag, and is one of the most stylish-looking sneakers on the market. It’s also lightweight, and won’t drag you down as you try to elevate over the competition.

This shoe consistently grades exceptionally when it comes to traction, as its herringbone pattern in the forefoot allows players to stop on a dime.

The only aspect potentially holding back the TRC Blaze court is its durability. Some users have noted that it doesn’t hold up too well, especially when playing outdoors. 2022 has been a long year, and you’ve been through a lot. Maybe you ended up getting that bonus after all, and want to treat yourself by spending it on some Air Jordan XXXIV’s.

We would support that decision. The Air Jordan XXXIV’s are an aggressive player’s best friend, as they support your feet on hard landings as well as any pair on this list.

From a breathability and comfort perspective, this product also stands up to a lot of its peers. It features a lot of the other premium technology that Nike shoes have come to be known for.

Even though it’s a bit of a splurge, there are a lot of things to like about this Air Jordan release. These sneakers are battle-tested, and should be ready to roll with you in the trenches of the most intense basketball games. The LeBron Soldier XIII SFG are traditional basketball hightop sneakers that will support your ankles as well as any shoe.

One helpful part of the shoe’s construction is its grooves, which minimize the number of particles that stick to the bottom of the sneaker. It’s unlikely that you’ll be slipping and sliding around in this footwear, which will allow you to make sharp cuts and stay in front of your defensive matchup.

It’s got a distinctive strapping system, which almost makes it feel like you are actually locking your feet in for a big-time clash of basketball stars.

The Soldier XIII SFG can get a little bit warm on your feet, so keep that in mind if you have naturally sweaty feet. While he may not be as much of a household name as he was earlier in his career, Derrick Rose still has a lot of fans around the basketball world. His accomplishments as a young player, and his perseverance as he got older are admired by a lot of people.

So too are his shoes, the D Rose 773’s. These sneakers won’t leave your feet feeling trapped, and has a soft and stretchable feel which fits well around your feet.

One interesting observation about these shoes is that some people have commented that the sneakers feel a little bit too loose. This is something that even players wide wider feet would rightly be concerned about, but it does speak to the roominess that the shoes inherently feature.

Don’t bring these babies to a high-intensity game right away, as they may need a few less intense contests to break in properly. Last, but certainly not least, we arrive at the Li-Ning Wade All City 9 V2 as the final recommendation of footwear for players with wider feet. It’s got a couple of cushioning technologies like cloud foam and Pebax that make it an attractive option in this market.

It’s also got great traction and has high marks with regard to air flow being able to permeate into the shoe during a game.

One concern for this shoe is the noted lack of shock absorption on the way down, which might cause players to feel the clanging more as their foot makes contact with the court.