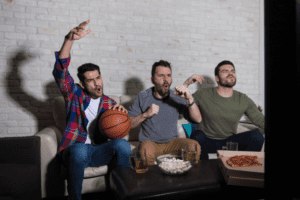 Whether you’re a frequent visitor of Basketball Buckets or an occasional passerby, hopefully, you leave with one clear takeaway in mind; the folks behind the site really love the game!

It’s always a lot of fun to talk about some of the best equipment for players to use or to make lists of current NBA stars. We promise there will be more of that to come in the future.

But today, we’re changing it up. We’re thinking about the very beginning of devotion to a sport that has given us so much joy.

While we realize that the game of basketball is fantastic in so many ways, we’d like to show others who are newer to the sport why it’s so entertaining to watch, and how to become a fan.

Why Basketball Is An Awesome Sport To Watch On TV

Let’s start with the obvious. For anyone to enjoy a sport, they need to be captivated by its players.

Basketball players are arguably the best athletes in the world, and their agility, stamina, and skill level are constantly on display. Each player on the court has a chance to meaningfully impact a play on every possession, which sustains an intensity level that is felt by viewers.

This piece isn’t necessarily meant to put down other sports in hopes of elevating basketball, but hoops do have some inherent advantages that make it attractive to watch.

For example, other sports have pretty stringent restrictions on how their players are supposed to position themselves on the field of play. Basketball has some rules in that regard as well but provides players on offense and defense with supreme flexibility to stand where they think they’ll be most effective.

This allows a basketball coach to come up with some creative plays to use on the court. Whether it’s setting someone up for a wide-open jump shot, or letting a talented player showcase their dribbling skills on their way to the rim, basketball games feature a ton of variety.

There are also only 10 players on a basketball court at any given time, and they’re all visible via standard camera angles used for telecasts. This isn’t always the case in other sports, which may have more participants, or are shot differently from a broadcasting perspective.

The action is also continuous during NBA games or college basketball tournaments, and there aren’t lulls that may cause viewers to lose interest during the course of the contest. This keeps fans locked in and engaged with what’s happening on the floor.

There’s also the benefit of knowing immediately whether scoring plays were successful or not. In other sports, there can be uncertainty about whether a ball or puck crossed a line, which can cause lengthy delays as that play is reviewed.

With basketball, it’s apparent whether the ball went into the basket, giving fans that instant gratification.

The Basics of The Game

If you’re relatively new to the sport, understanding everything that is happening during a basketball game can be an adjustment. The purpose of the lines on the court, the whistles that pause play, and the regulations that define what players can and can’t do might be foreign to you.

At one point, these were all things we didn’t know either! But we’re happy to explain some of the basic elements to get the ball bouncing on your quest to become a basketball fan.

In prior years, the NBA has made its rulebook available to the public. In some cases, it’s been as long as 68 pages.

We won’t force you to read a War and Peace-length novel to understand the game of basketball, but we will share some of the most important regulations of the game.

If we’re being honest, basketball fans want to see the ball go through the hoop as much as possible. Here are the possible point values for each shot in a game.

One point—If a player is fouled in action of shooting, or if a team eclipses a certain foul total, a player will head to the free throw line just above the painted area. With the game stopped and no one guarding them, a player will take shots worth one point each.

Three points—There is a curved arc around the court called the three-point line. Any shot taken from behind the line is worth three points.

Although the sport is moving away from traditional positions and roles for each player, basketball still uses them conceptually to help put an ideal team on the court.

There are five positions: point guard, shooting guard, small forward, power forward, and center. We’ll touch on the general responsibilities of each role.

Point Guard: Usually the shortest player for each team, the point guard usually has the best ball-handling skills. They dribble the ball up the court past halfcourt and are the initiators of the offense.

Since they theoretically have the ball in their hands the most, the point guard is traditionally responsible for getting their teammates involved. A defender is also tasked with keeping the other point guard from being able to distribute the ball.

Shooting Guard: There isn’t much suspense or question about what a shooting guard is supposed to do. When they have the ball in their hands, they’ve got the green light to take good shots at the basket.

They’re generally the best shooter on the team and are the most likely to knock down three-point attempts. Other teams know this too though and often choose to have their best defensive players guard opposing shooting guards.

Small Forward: You can’t really use context clues to figure out the responsibility of a small forward, so we’ll just tell you. Basically, they’re the jack of all trades and maybe the master of some.

A small forward is expected to pitch in with some scoring, playmaking, and rebounding. Because of their traditional median height, they also tend to be versatile, having the ability to take on both smaller and larger players defensively.

Power Forward: Historically, a power forward has provided toughness and physicality while rebounding and playing defense. Their statistics may not be the most impressive, but their presence is certainly felt throughout the course of a game.

Power forwards still play that way, but have gradually increased their shooting range to extend beyond the three-point line. In the past, they could make jump shots around 15-18 feet at most.

Center: Centers are the tallest players on a basketball team, and can sometimes be a foot or taller than their point guard teammates. They have usually played close to the basket and can make short shots over smaller defenders.

Because of their height, centers can also be the best defensive players on the court. They’re trained to have their hands up most time during the game, so their length can bother the opposing offense.

Now you’re basketball literate; you understand the action you’re watching and are pumped up by the sport! What happens next?

To keep up that level of enthusiasm and interest, you can follow games and news affecting the league more closely. Social media is a great way to stay connected about current events involving your favorite players and teams.

In particular, Twitter is a great place to find out breaking injury news, rumors about possible player trades, and much more. In order to connect with athletes directly, Instagram is a prime recommendation, while Twitter also serves as a good medium.

Whether you become a fan of certain NCAA college basketball teams or NBA teams, there are many places where you can download or view a team’s schedule, so you never miss a game.

This will allow you to come into games with knowledge of certain narratives that have been developing, which makes them even more exciting to watch!