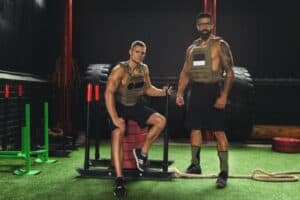 Below are two very similar and very common basketball plays that hoopers can relate to, with slightly different end results. We’re going to take a look at why the outcomes may not have been the same, and what effect that has during the course of a game.

First scenario: You’ve jumped into the passing lane, and picked off the ball with a head of steam going the other way. Here’s a chance to get an easy bucket after a timely defensive play.

One defender is determined not to make life too easy for you, and is sprinting down the court to beat you to the hoop. You’ve got the advantage, and the determined defender is not going to be able to get in front of you.

The defender jumps into your body and makes contact with your arm as you’re going up for the finish. A foul is called, but you weren’t able to get the hoop.

Second Scenario: You’re playing off the ball defense, and you see that your teammate is being posted up by a larger opponent.

You dart towards the ballhandler and poke the basketball away from behind, and pick it up with visions of taking it coast to coast. One of the opponents is heading towards you full bore hoping to block your layup. They make contact, committing a foul, but you convert the bucket anyway, punctuating the play.

That second scenario is way cooler, right? The momentum of a game can shift when an offensive player finishes through contact, signifying that nothing will get in the way of a bucket.

The best players who can still knock down the shot with defenders draped over them are usually training for that exact situation with weighted vests. Let’s take a closer look at some of the best weighted vest products out there, and how they can help you change the course of your next game.

3 Weighted Vests To Check Out Can be adjusted from 11lbs up to 20lbs. The vest weighs 11lbs and includes 6x weight packs (1.5lbs each), allowing you to add or remove them at any time to adjust the intensity and efficiency as you progress. The workout equipment body weights are evenly distributed across the vest, so you will enjoy maximum comfort during all workout types, without straining your back or shoulders, allowing you to train better.

Arguably the premier option for weighted vests comes from Aduro Sport. It has a lot of factors working for it, including a neoprene material that will help keep you cool during a high intensity workout.

In addition to the sweat resistant construction, the vest is also built with two stretch pockets, which can be nice if you want to put your phone in there and play some music to get in the zone.

As its name suggests, basketball players can adjust the weight levels of the vest from 11 pounds to as much as 32 pounds.

The main prohibitive aspect of the Aduro Sport vest might be its price, as you will be able to find other alternatives for less money. However, the product does come with a lifetime warranty, which is comforting to know if anything should happen to it. The weighted vest for running is specially designed with ankle or wrist weights of 1 lb each (1 pair), which makes it an ideal set for weight training, weight loss or fitness for men and women. The adjustable weighted vest will increase the intensity & efficiency of your workout.

Another superior selection in the weighted vest world is Pacearth’s product. It also features weight adjustment ability, and is known to fit snugly to accommodate a full latitude of movements a basketball player can make.

Even though this piece is focused on vests, Paceearth’s offerings come with a welcome surprise. In addition to a quality vest that gets the job done, the package also comes with ankle weights.

This addition allows you to train your body in multiple ways in one purchase.

The only question comes with durability, as some users have noted that it may not be ideal for extended length workouts. The appearance of the Cross 101 adjustable weighted vest alone may be enough to motivate you to run through a wall. It’s default look features a camouflage exterior, making an athlete feel like they are getting ready to join the Armed Forces or something.

The product does a great job of allowing a player to scale their workouts in really small increments. Rather than making premature leaps that can set someone back, the Cross 101 allows weight to be adjusted in five pound increments, which enhances the customization of a workout.

It’s also easy to put on, as Velcro straps are self-explanatory to those that have not used weighted vests before. It is marketed as a one size fits all product that adjusts to the contour of body shapes with broad shoulders, but some have lamented that it is not the most comfortable in that area.

Why Basketball Players Use Weighted Vests

There are a few different benefits that come from using weighted vests. Let’s think about the fast break plays introduced at the very beginning. What could’ve helped the player finish the play?

We know that weighted vests add mass to a person artificially. If a player is jumping up and down with one, the resistance created by the added weight is building up strength in a player’s knee, quads, calves and thighs.

An athlete’s vertical leap is bolstered, and hanging in the air for a second or two longer than your defender can help minimize the impact of the contact they make while you’re trying to score.

Some players like to actually play simulated games or shoot around with weighted vests, and that makes a ton of sense. Whether it’s a product you purchased from an online retailer weighing you down, or an actual human defender, the point of the game is to overcome that.

If you can score with your shoulders and chest carrying an additional six, eight, ten or twenty pounds of a weighted vest, it will be much easier for you to power through the flailing arms of a defensive player.

Lastly, running with a weighted vest is a good idea from a cardiovascular training perspective. Covering the same distances with a little more bulk on your body will allow you to maintain a high level of endurance throughout the entire course of the game.

Are Weighted Vests Worth It?

Training with the extra weight of a vest is certainly a valuable way to get an edge on the court. In and of itself, the vest is not going to have the effect of the “Secret Stuff” the cartoon characters had in the 1996 edition of Space Jam, but it will allow your body to respond positively to basketball situations that have stymied you in the past.

It is extremely important to start with a weight figure that you can handle, and increase from there. Beginning with resistance that’s way too heavy can negatively affect your posture and undermine your efforts to gradually improve your finishing ability, so keep that in mind as well.