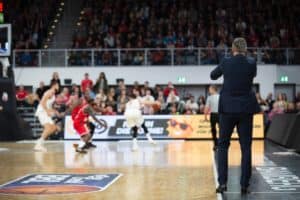 I’ll never forget my first encounter with the press defense. I was on the middle school basketball team and was usually in charge of inbounding the ball each time the other team scored. The opposing team’s point guard nailed a three-pointer to tie the game with two minutes left in the fourth quarter.

When I went to inbound the basketball, I noticed a defender right in front of my face with arms raised and yelling loudly to distract me. I also noticed that four out of the other team’s five defenders were on our side of the court. I hastily tried to get the ball to our shooting guard, but unfortunately, a defender stole the ball and made an easy layup.

Our head coach angrily called timeout and gave me a real earful when I got to the bench. For the first time in my young basketball career, I had fallen victim to the full-court press!

The press can be a tough defense to face in basketball, but here are some key techniques to defeat it.

What is a Press Breaker in Basketball?

A press breaker is an offensive strategy that is used in basketball to “break the press” of the defense. Teams employ the press defense in hopes of creating turnovers and getting easy buckets. The key to running any successful press breaker is to remain calm at all times.

Remember, the other team’s defense is simply trying to rattle you and your team. Fight the urge to panic. The good news is that if you can successfully break the opposing team’s full-court press, you can set your team up for some quick and easy baskets on the other end of the floor.

How to Beat Press Coverage in Basketball

Now that you know what a press breaker is, let’s get into some more details about how to break specific types of presses. There are several different types of press defenses in basketball today.

In this article, we’ll cover how to beat the full-court man-to-man press and the three most common types of zone presses.

How to Break the Full Court Man-To-Man Press

Here are the main keys to beating the full-court man-to-man press:

When the defense is running the 2-2-1 zone press, there is no defender guarding the inbounder. This should help the inbounder see the entire floor more clearly. However, he or she will still have to be careful while inbounding the basketball because five defenders will be guarding only four offensive players.

With your O3 player inbounding the ball, put two of your best ball handlers (usually guards, we’ll call them O1 and O2) near the free-throw line. Have the O3 player smack the ball to signal O1 and O2 to sprint in opposite directions to try and get open. One player should go to one corner near the inbounder while the other cuts to the opposite corner.

The 1-2-2 press is a type of defense that focuses on trapping the offensive player on the sideline. The 1-2-2 is more of a half-court press instead of a full-court press since only one defender is past the half-court line.

The inbounder (O3) should have no problem getting the ball into O1 since there won’t be any pressure on the inbounds pass. Player O1 should recognize the 1-2-2 press setup and make it a top priority to not dribble toward the sideline. Player O3 should trail behind O1 to act as a safety valve if O1 gets trapped by two defenders.

If the ball handler (O1) gets trapped, he should quickly pass to player O3 or call a timeout to avoid a turnover. If O3 does receive the ball, he should focus on getting the ball across the half-court line quickly and efficiently. Once past half-court, O3 should be able to get the ball to O5 on the wing for a decent look at a high post jump shot.

Another common type of press defense in basketball is the 3-1-1 press. In the 3-1-1, three defenders will be up halfway between the free-throw line and half-court line. Defender 4 will be around the three-point line and defender 5 will be underneath the basket guarding against the long baseball pass.

It can be intimidating for the inbounder to look out and see three defenders lined up on his side of the court. However, the inbounder will not have a defender in his face so he should be able to safely inbound the ball to either O1 or O2. Like most presses, the 3-1-1 is designed to trap an offensive player at either sideline.

That strategy should work to break the 3-1-1 press the majority of the time. If it doesn’t work, have either O4 or O5 set a screen near half-court. This screen will open up a passing lane for what could be a nice 2-on-1 situation and some easy fast-break points for your team.

Additional Thoughts on Breaking Any Press

It’s normal for any basketball team to get a little intimidated by any type of press defense. So much of playing good basketball comes down to having the right mindset. As a coach, it’s your job to mentally prepare your players to break the other team’s press.

Teach your players to never panic when they see a press defense, but to look at it as a good scoring opportunity. Remind your inbounder that he can call a timeout if he is unable to find an open teammate to get the ball to. Stress to your players the importance of good constant movement when facing a man-to-man full-court press.

Work on breaking all different types of presses in practice so that your players will know what to do when it happens in game situations. Have your players practice avoiding the hot spots on the court where traps normally occur. Always keep a player behind the ball as a safety net in case no other player down the court is open.

The nice thing about facing a press defense is that once your team breaks it, they will normally have an advantage on the offensive end of the floor. There’s nothing better than any easy layup to build up your team’s morale. Remind your team that once they get a couple of fast-break buckets, the other team probably won’t run a press defense for the rest of the game.

Breaking the press defense is a lot like dealing with a big bully. Once you stand up to him and prove you aren’t scared, he’ll likely leave you alone. The game of basketball and the game of life have a lot in common!