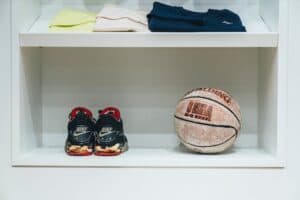 Kids looking to have a fun scrimmage at the park or adult recreational players look at a trip to their local sporting goods store the same way.

Those of us who aren’t (yet) professional athletes want to purchase items from recognizable top basketball brands, which are respected throughout the basketball world.

Whether our game reflects it or not, our apparel should convey an appreciation and understanding of basketball culture. Regardless of where you live in the United States or across the globe, here are 8 brands that are synonymous with the highest levels of the game.

Pro Players Who Use Wilson: All of them! The NBA made a surprising change ahead of the 2021-2022 season, as they decided to change their basketball provider for the first time in 37 years. Wilson is now the official brand of basketball, as their, all leather ball offering had been tested out during draft combines and summer leagues. The NCAA also uses Wilson basketballs.

Interesting Stats: Annual revenue is estimated to be between $458 million and $519 million.

Background Info: Wilson has been a fixture of the sports landscape for many decades, primarily entrenching itself with baseball and football. The company has been around since 1913, when it was born as a subsidiary tasked with finding ways to reuse slaughterhouse materials.

Pro Players Who Use Spalding: It used to be all of them! Spalding had an exclusive relationship with the NBA from 1983 through 2020 and was the league’s basketball of choice throughout that period. As mentioned above, Wilson has since taken over that distinction, but the longstanding relationship Spalding has with the league could lend itself to other opportunities in the years to come.

Interesting Stats: Each basketball undergoes a bounce test after its construction. They are dropped from an elevated surface 6 feet off the ground and must bounce between 52-56 inches.

Background Info: Reebok was a company destined to make it in the sports footwear business. It has British roots dating back to the late 1800’s, but didn’t start to establish itself in America until the 1980’s.

It got its name from the “Grey Rhebok”, which is a type of African antelope.

Interesting Stats: Converse’s global revenue was logged at $2.35 billion in 2022, as its reach has extended far beyond the world of sports.

Background Info: While the brand is being recognized again by some talented current players, Converse’s popularity was established in the early days of the game. In the 1920’s, the company created one of the first basketball shoes that would be worn for decades to come.

Chuck Taylor was a brand ambassador, salesman, and coach, who would show up to basketball games wearing Converse All-Star shoes. Because of Taylor’s likeability in the community, the shoes became linked with him forever.

Interesting Stats: Puma has seen its footwear sales rise considerably in the last 5 years. The company sold 3.16 billion EUR worth of footwear in 2021, which accounted for just over 46% of its total sales.

Background Info: The major footwear player got its start in Germany just over a century ago. Brothers Rudolf and Adolf Dassler started making athletic sneakers in their childhood home in 1919, and their products would be worn by German Olympians in the 1920’s and 1930’s.

Rudolf Dassler would leave his brother in the late 1940’s and start his own company called PUMA Schuhfabrik Rudolf Dassler, which is how the name originated. Once Clyde Frazier bought into the brand in the early 1970’s, as well as international soccer star Pele, the brand was off and running.

Interesting Stats: It’s intriguing to observe Under Armour’s bottom line jump after Curry came on board. As the point guard was winning titles with Golden State, revenue doubled from $2.3 billion in 2013 to $5.1 billion in 2018.

Background Info: It’s really interesting to see how far Under Armour has come in recent years, and throughout the lifetime of millennials. Many will remember some of the brand’s initial marketing efforts tailored around football players, with the slogan “We Must Protect This House.”

It seemed like they would specialize in tight tops that would keep athletes warm in cold weather, but they evolved into something much bigger. Curry would join Under Armour in 2013, which was really important considering that was about the time he got over the ankle injuries that plagued him early in his NBA career.

Interesting Stats: Since the turn of the century, Adidas has made a habit of turning record profits year in and year out. Predictably, they were slowed by the pandemic like a lot of other businesses but bounced back in 2021 with $10.8 billion EUR in gross profits globally.

Background Info: If you read the background story regarding the genesis of Puma above, it’s pretty much the same as Adidas’ tale. Basically, the other brother who didn’t start Puma, went his own way and started Adidas.

This was Adolf (Adi) Dassler, who pioneered shoes with a classic three stripe logo that continues to define the brand today.

Interesting Stats: Nike continues to be the most popular brand, and the numbers back that up. They have 80,000 employees throughout the globe and have already surpassed $46 billion in revenue so far in 2022.

Background Info: The story of Nike and Michael Jordan was addressed in ESPN’s “The Last Dance”, but their partnership completely changed the landscape of the apparel industry. In the early 1980’s, Nike was almost exclusively known as a long distance running shoe outfit.

That all changed when they broke the bank for a young player who was still trying to establish himself as a young player with the Chicago Bulls. Jordan’s game and persona took off, as did Nike’s ability to market their ever-growing product line under their cool “Swoosh” logo.