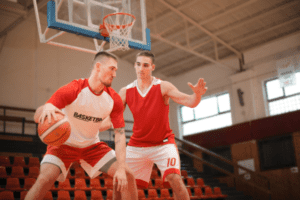 Basketball fans of a certain age have an opportunity to celebrate a cinematic milestone for a remaining couple of months of the year.

It’s the 30th anniversary of the classic film “White Men Can’t Jump”, where Woody Harrelson and Wesley Snipes team up to win money on the outdoor courts of Los Angeles.

We’ll pay our respects to “White Men Can’t Jump” by highlighting the best past and present white NBA players.

It didn’t feel like the Denver Nuggets would end up with one of the greatest players in NBA history when they selected Nikola Jokic in the second round of the 2014 NBA Draft. All he’s done in his seven-year career is revolutionize the center position.

With averages of 19.7 ppg, 10.4 rpg, and 6.3 apg, Jokic’s game is about as well-rounded as we’ve seen in a very long time. He’s won the MVP award twice and has an excellent chance to bring home the league’s highest individual honor again this season.

Seasoned by playing with and against experienced professionals in Europe as a teenager, Luka Doncic of the Dallas Mavericks didn’t have much of a learning curve entering the NBA. As the primary ballhandler and playmaker on his team, Doncic has a hand in almost everything that happens on a nightly basis.

In the playoffs last year, Doncic’s game reached new heights as he led the Mavericks all the way to the Western Conference Finals. He’s never afraid of the big moment and will do his best to take Dallas one step further in 2022-2023.

It wasn’t a given that Domantas Sabonis would reach star status in the NBA, but his bloodlines always gave him a pretty good chance to make it. His father Arvydas was one of the most skilled big men in basketball history.

Sabonis has bounced around a little in his six years in the NBA but has always been productive. He’s essentially been an automatic double-double on a nightly basis and hopes to be a catalyst for the Sacramento Kings as they look to end an extended playoff drought.

He was unheralded coming out of college, but Nikola Vucevic has been a really solid player for a long time. Many people forget that he was the centerpiece of the blockbuster multi-team trade which sent Dwight Howard to the Los Angeles Lakers from the Orlando Magic.

After several seasons of impressive play but disappointing team success with Orlando, Vucevic is hopeful that the Chicago Bulls can make some noise in the Eastern Conference this season. His ability to rebound while stretching the floor is a huge asset to his current team.

He waited patiently for a contract extension from the Miami Heat, but Tyler Herro was eventually rewarded. The guard has been instrumental in some high-profile games during his short career and is one of the lynchpins of Miami’s future.

Since point guard Kyle Lowry isn’t getting any younger, Herro’s role will only continue to grow. He took home the NBA Sixth Man Of The Year award last season as the league’s premier bench player.

It’s a little hard to believe that Kristaps Porzingis is only 27 years old. It feels like he’s had a full career arc given what’s taken place previously in his time with the New York Knicks and Dallas Mavericks.

Porzingis’ ability to block shots while shooting over the top of defenders still makes him one of the ideal players for the modern NBA. While his ceiling may be a little lower than originally thought, he still has a chance to write a bounce-back narrative with the Washington Wizards.

In the spotlight since his days at Butler University, Gordon Hayward has grown up in the public eye. There were mixed opinions about how he would fare in the NBA, but he’s proven that he can be an effective offensive player when healthy.

He’s battled the injury bug quite often in the last several years but is an X-factor for the Charlotte Hornets this season. Hayward made an All-Star team in 2016-2017 while playing for the Utah Jazz.

He isn’t just in the pantheon of greatest white players ever; Larry Bird is one of the best basketball players, period. From the instant he showed up to his first practice as a rookie with the Boston Celtics, the franchise immediately became a title contender.

The three-time NBA champion and two-time Finals MVP left everything he had out on the court. In addition to his tangible accolades, Bird was also one of the fiercest competitors the game has ever seen.

Simply put, he’s one of the greatest scorers ever. At seven feet tall, Dirk Nowitzki completely changed the expectation of how big men were supposed to play.

He would routinely bring the ball up the floor and nail three-pointers when players at his position were sprinting to get close to the rim. With his array of fadeaways and pump fakes, Nowitzki made a living converting attempts that would be considered difficult for almost anyone else.

It’s really pretty special when your greatness transcends time, and a league decides to make the silhouette of your person their official logo. For this reason and many others, Jerry West’s influence on the NBA will always be readily apparent.

He was a 14-time All-Star with the Los Angeles Lakers who made one of the most memorable shots in NBA history. West was also the front office architect of the Lakers dynasty in the early 2000s, featuring Shaquille O’Neal and Kobe Bryant.

There aren’t too many names that come to mind when thinking about a traditional consummate point guard before John Stockton’s. His primary focus throughout his 19-year career with the Utah Jazz was getting his teammates easy looks at the basket.

Although an NBA championship eluded Stockton, his longevity spanning multiple eras of the league will always be highly regarded. In addition to being a great passer, Stockton also hounded opponents on defense, averaging 2.2 spg in his career.

He was a frustrating player to coach at times, but Gregg Popovich eventually learned to trust Manu Ginobili’s creativity and persistent aggression. This approach put constant pressure on opposing defenses and gave the San Antonio Spurs an elite weapon coming off of their bench.

Along with Tony Parker, Ginobili would help create a new dynasty in San Antonio alongside Tim Duncan. His accomplishments with the Argentinian national team also cannot be ignored, as he led them to a gold medal in the 2004 Olympics.

John Havlicek, or “Hondo” as he was known, was a part of eight NBA title teams with the Boston Celtics. While his offensive stats are commendable, Havlicek was one of the most talented perimeter defenders in the league, at a time when steals and blocks were not tracked.

The arrival of Pau Gasol helped further signal the globalization of the game. He was easily identifiable as the slender Spaniard on some gritty Memphis Grizzlies teams in the 2000s.

However, his life and the trajectory of his career would completely change when he was traded from Memphis to the Los Angeles Lakers. Gasol would prove to be the missing piece Los Angeles needed, and was a huge part of the Lakers winning back-to-back championships in 2009 and 2010.

Ever since he was a little boy, Pete Maravich trained with one goal in mind. His father Press came up with unique skill enhancement drills that would equip Pete with some of the most marvelous shooting and dribbling abilities of his time.