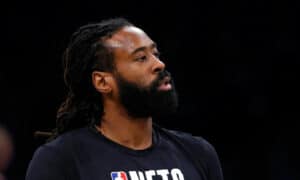 For the most part, basketball players should let their game distinguish themselves on the court. Getting to the rim at will, setting up teammates for open looks, or containing a great player on the defensive end will get athletes noticed.

However, if you’re doing any one or more of those things above, and you have a great hairstyle, the sky’s the limit. Fans gravitate towards NBA players who possess elite talent in certain parts of the game but also stand out from a follicle perspective.

Dreadlocks have become a popular hairstyle in the NBA, and have been rocked by great current and former players. We’ll take a look at the guys who wore the dreads well and continue to excel at the game’s highest level.

There’ve been better players who have advanced the dreadlock community, but perhaps no one’s specific game has done more for the hairstyle than DeAndre Jordan. He’ll spend a lot of the current season on the bench for the Denver Nuggets, but was an athletic freak earlier in his career with the Clippers.

Jordan was an integral part of the Clippers’ “Lob City” teams last decade, as he(and his dreads) would soar through the air to throw down lobs from Chris Paul. It’s a legacy the gentlemen on this list hope to continue for years to come.

In the analytics/fantasy basketball realm of the NBA, Robert Covington is somewhat of a hallowed figure. Being able to shoot threes while accumulating blocks and steals is a rare skill set that’s valued by the statistically inclined.

On the real-life court, Covington is looking to make an impact with the Los Angeles Clippers this season. He’ll be an important piece to the puzzle in a depth capacity, as Kawhi Leonard and Paul George look to remain healthy enough to play a full campaign.

If players aren’t able to become household names as stars, one of the next best things is to become a valuable role players. Jae Crowder has been a fixture on several teams that have made deep runs into the postseason in recent years.

It appears as if his time in Phoenix may be coming to an end, but it’s almost certain that Crowder will once again end up with a franchise that has a legitimate chance to win the NBA title.

It seems like a decent bet that Mike Conley will not spend the entirety of the 2022-2023 NBA season with the Utah Jazz as they look to rebuild their franchise. He will likely be traded to a team that has hopes of reaching the postseason or advancing a couple of rounds this spring.

In his heyday, Conley was a crafty, intelligent point guard with the Memphis Grizzlies. His quick hands and ability to move his feet anchored a defensive minded team for many years in the 2010’s.

For the youngest of NBA fans, Derrick Rose might just look like an average role player with the New York Knicks. If he comes in and gives New York a boost off the bench with some scoring and drives to the rim, it’s viewed as a bonus.

However, before a plethora of injuries and his dreads came into the picture, Rose was one of the NBA’s very best players. He won the league MVP award in 2011 over the likes of LeBron James and other worthy contenders.

Alright, so this one might be a bit of a stretch. We’ve never really seen Miami Heat swingman Jimmy Butler wear dreadlocks out on the court in a game that mattered.

In what was a hilariously unexpected twist to NBA media day, Butler did show up to Heat training camp rocking dreads. This threw everyone off, and Butler cut them shortly thereafter.

He has said that he might bring them back sometime in the future.

For many years, Jrue Holiday got his recognition as being one of the best two-way players in the NBA. He could get his own shot on the perimeter, while also making life miserable for opposing guards.

At long last, Holiday won an NBA championship in 2021 with the Milwaukee Bucks. He had a signature performance in the NBA Finals against future Hall of Famer Chris Paul, who wore down thanks in part to his relentless defensive pressure.

It feels like James Harden has tried it all in his basketball life. He’s been a pass first sixth man, the focal point of an offense, and a secondary scorer on teams that had an established superstar.

As Harden tries to navigate his way in Philadelphia, it must also be noted that the former Arizona State star has been through his fair share of hairstyles as well (beyond just the beard0. During his brief time with the Brooklyn Nets, he opted to go for the dreadlocked look.

At this point, any type of hairstyle that brings him an elusive championship might be what he prefers moving forward.

After being selected with the second overall pick in the 2019 NBA Draft, Memphis Grizzlies point guard Ja Morant has become one of the young faces of the league in a very short amount of time. His shooting skills are still coming around, but he’s proven to be one of the most athletic players we’ve seen enter the league in a long time.

His forays to the basket cannot be denied, and his short but catchy first name allows announcers to come up with memorable sayings such as “The Ja-Breaker” anytime he throws down a rim-rattling dunk. Morant helped take the Grizzlies to the second round of the playoffs last year and is looking to get even deeper into the postseason this spring.

Top Past NBA Players With Dreads

He came into the league a bit overshadowed on some really talented Dallas Mavericks teams, but Marquis Daniels was a trustworthy player from the moment he stepped into the league. Dallas was a perennial title contender during Daniels’ time there and was a notable part of the rotation.

He would bounce around a little in later years, rounding out his career with the Milwaukee Bucks in 2012-2013.

He was never going to make an All-Star team, but Brian Grant was a well respected professional big man throughout his career. He knew his role would consist of setting solid screens, keeping opposing centers off of the block, and converting 10-15 foot jump shots every now and then.

Perhaps his most famous run came with the Portland Trail Blazers in the late 1990’s, as he and Arvydas Sabonis tried to slow down a freight train otherwise known as Shaquille O’Neal. He would also have some productive years with the Miami Heat in the early 2000’s.

One of the most interesting 1990’s through 2000’s careers in the NBA belonged to Latrell Sprewell. He had some maturity issues early on with the Golden State Warriors, but put that behind him effectively during a great stint with the New York Knicks.

Sprewell’s heart and lack of fear in big moments endeared him to Knicks fans. He would also resurface as a valuable player on the Minnesota Timberwolves team that made the Western Conference Finals in 2004.

This might seem a little counterintuitive since Ben Wallace is most prominently known for the afro that he popularized during his peak with the Detroit Pistons. While the ‘fro will always be Wallace’s go-to look, he also had dreads later in his career with the Chicago Bulls and Cleveland Cavaliers.

Wallace has a great “rags to riches” story. He wasn’t drafted but continued to bring maximum effort and energy to the floor, which eventually made him an NBA champion.

At his athletic peak, fans would be hard pressed to come up with a more exciting roller to the rim than Amar’e Stoudemire. He was the beneficiary of some tremendous passes from Steve Nash, but Stoudemire’s physical ability to jump straight up and jam the ball through the basket was show-stopping.

As he got a little bit older, Stoudemire wasn’t able to jump over every single defender, so he became a more well-rounded player. Hard work paid off for him, as he became a reliable mid-range jump shooter.

He’s one of the most underrated players of his era, but Chris Bosh had a fantastic career. He was taken one spot after Carmelo Anthony and one pick before Dwyane Wade in the legendary 2003 NBA Draft and was a force to be reckoned with during his time with the Toronto Raptors.

Bosh would eventually team up with Wade and LeBron James to win multiple championships with the Miami Heat, sacrificing individual accolades for team glory. His ability to spread the floor and play without the ball was so important to Miami’s dynamic.