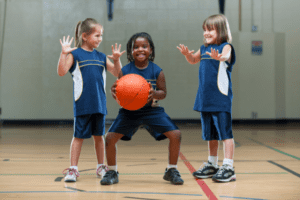 Few things in life are cuter than watching kids get into basketball.

Whether it’s little ones throwing their entire body weight into a shot headed for a hamper, a makeshift hoop on top of a door, or lowered rim on a regular court, the time and money spent watching it all unfold is worth it.

As children graduate from running around the house pretending that they’re the next Stephen Curry or Jayson Tatum to instructional programs and youth leagues, they’ll need a pair of basketball sneakers that can carry their little feet up and down the floor.

While their jerseys may hang loosely over their growing torsos, and their shorts might be way too big or too small, kids’ basketball shoes should be strategically purchased to help children feel a high level of comfort.

Parents and coaches might be exposed to significant amounts of advertising for adult shoes, but may not know where to start looking for the top basketball shoe options for kids. We’ll help streamline the search with top picks that your little baller is sure to love. The Scoop: As you’ll soon realize, Adidas will have a prominent presence on this list. We’ll kick things off with the Kids Pro Spark, which is arguably the most popular choice for parents and kids at the present time.

While it’s not uncommon for adults to care about the exterior look of a sneaker, little kids might base a lot of their initial opinion on whether a shoe’s color scheme matches up with their favorite team or preferred hue. The great thing about the Pro Spark is that it comes in eleven different pigments, increasing the likelihood that your little one will approve.

One major plus for the shoe is that it has great breathability and ventilation, which is important considering that youthful bundles of energy might not be tapped out even after the game ends. The midsole also provides a high level of cushioning, which helps keep a child’s feet feeling fresh in the fourth quarter. The Scoop: There’s no way that the leading retailer of shoes across the globe would be shut out from a recommendation for any demographic. Nike’s Kids’ Team Hustle D8 leads the brand’s options for children.

Even though the exercise of buying new shoes for kids with ever-changing sizes can be a challenge, knowing that the Kids’ Team Hustle D8 has exceptional durability is music to parents’ ears. Its upper is made out of leather, giving it toughness and flexibility that will allow it to hold up throughout a demanding youth league or pickup game schedule.

The rubber outsole provides the youngster with a good grip on the floor, allowing them to stop on a dime to change direction in transition. Most games involving little kids and big kids alike are played at a fast break pace, making this factor one to keep in mind. The Scoop: Just as it has made inroads in the adult realm for best basketball shoes, Under Armour continues its momentum with the Kids Jet in the youth market. One facet of this shoe protects children in a way that isn’t often considered by other alternatives.

As kids go through varying levels of coordination, the chances that they’ll bump feet are much higher than at more advanced levels. The great thing about the Kids Jet is that it comes with toe caps that guard against a significant level of impact.

The mesh fabric in the upper part of the sneaker also allows air to flow in, which means stinky shoes mingling with other footwear in the closet won’t be a reality parents have to face. The Scoop: There’s a small handful of players that most kids will gravitate to. Even at his advanced age in an athletic context, LeBron James still has a lot of appeals thanks to his continued effectiveness and recent title in the NBA Bubble two years ago.

Kids tend to gravitate more toward players than teams these days, which means that the Kids’ LeBron XVI is going to catch many elementary school students’ eyes. It has a lot going for it, as it features an “extra sock” that essentially surrounds feet to insulate them from outside wear and tear.

This might be looked at as a downside by some, but is made up for in flexibility with its laces. The LeBron XVI has extra holes to give a child or parent a ton of options with regard to a looser or tighter fit. The Scoop: It’s hard to get kids to care about anything that didn’t happen in their lifetime, but outfitting them with a timeless classic like a Jordan Kids Retro III might have them asking questions about His Airness. Watching the Chicago Bulls great on YouTube while your son or daughter unwraps a pair for the holidays would be a win-win for everyone.

From a practical perspective, it’s hard to go wrong with Jordan’s on the court. This pair will provide the novice hooper with a tremendous amount of ankle support.

The price point for Air Jordan can be a little steep, which may understandably lead some parents to go in another direction. If there’s room for it in the budget, however, they’re as reliable as anything out there.

6. AND1 Kids Show Out Basketball Shoe AND1 Kids Show Out Basketball Shoe

The combination of the synthetic upper and mesh tongue creates breathability, while the molded rear quarter adds support.

The Scoop: Adults reading this piece might be a little surprised to see a shoe from AND1 as part of a 2022 rundown of the youth sneaker world. The Netflix special about the demise of the brand got a lot of attention from hoops fans who remember watching their mixtapes in the early 2000s.

Don’t let that narrative stop you from checking the Show Out basketball shoe for your little one though. This high-top won’t break the bank and is lightweight, which won’t bring your kid back to Earth as they sky for a rebound.

One factor to consider is the potential for the sneaker to erode a bit in the front area. With that in mind, this might be a good stopgap shoe if you anticipate your child will experience a growth spurt in the near future. The Scoop: Most ballers know that defense is usually integral to winning championships, but the offense will usually be what draws kids into the sport initially. With this in mind, the myriad of ways in which Kevin Durant can put the ball in the basket will attract many young players to the game.

If they want to emulate the Brooklyn Nets forward on the floor, it might be a good idea to grab a pair of Kids KD 8’s off of the shelf or from an online retailer. The shoes’ traction can be described as high-quality, while comfort isn’t sacrificed thanks to Nike’s Flyweave technology.

If your kid is dead-set on bringing kicks to the court that his or her friends will think are cool, look no further than the Kids KD 8. The Scoop: It’s understandable why parents think their basketball sneaker options are limited to high-top shoes or those of the low-top variety, but there’s an appealing middle ground to keep in mind. Adidas Kids Pro Next kicks are mid-tops, which split the difference.

It’s an interesting alternative since the Pro Next sneakers feel more liberating than high tops that may engulf your ankle but more protective than low tops which leave most of your leg exposed. This might be a good place to start the search, so your child can experience a middle ground rather than extremes on the sneaker spectrum.

The Pro Next is a very comfortable shoe, thanks to the Cloudfoam cushion material it features. The Scoop: These sneakers might be on the way up considering the new heights Donovan Mitchell is taking his game to with the Cleveland Cavaliers. They’re also well regarded as an improvement in the line of shoes the star guard has released.

One of the biggest feathers in the cap of the D.O.N. Issue #3’s is its responsiveness. Some sneakers make a player feel like they are operating in quicksand, but this pair allows an athlete to feel like their shoe is providing them with some extra burst as they plant their foot.

By and large, this is a well-regarded product, but there’s one thing to possibly be wary of. Certain players have felt like their heel tends to slip around within the sneaker. Soft insole provides an comfortable feel and fit.A wider-than-average toe box gives your feet room to breathe and enough toe spread for improved balance and stronger base to push off.

The Scoop: Our breakdown today ends with a solid selection from the folks at WETIKE. While these shoes may not be a staple of your child’s athletic footwear for many years, it’s a popular choice when it has limited wear and tears.

It’s mostly comprised of polyurethane and synthetic material, which allow the shoe to remain malleable without it feeling too rigid on a youngster’s feet. Its rubber soles also prevent slippage to keep your future star upright.

WETIKE also offers its product in several different colors, giving children a wide latitude when it comes to determining what type of fashion they’ll feature on the court.