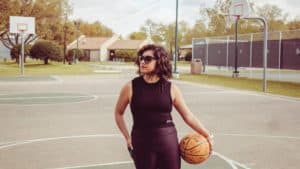 I remember several years ago when my daughter started playing high school basketball. She relied on inspirational quotes from some of her favorite women’s basketball players to keep her highly motivated. It was amazing to watch how much her overall game improved thanks to some of these quotes.

If you are a female basketball player, you will be able to relate to these wise and inspirational quotes from various coaches, players, and celebrities. So, without further adieu, let’s get to the list. Feel free to refer back to it whenever you may need a little extra motivation.

50. Some people want it to happen, some wish it would happen, others make it happen.
-NBA Hall of Famer Michael Jordan

49. Morale and attitude are the fundamentals of success.
-Bud Wilkinson

48. Winning is like deodorant- it comes up and a lot of things don’t stink.
-NBA Coach Doc Rivers

47. Every day that you wake up, you have one job and that is getting better.
-NBA Point Guard Derrick Rose

46. To be successful, you have to expose yourself to different situations- different styles of play, different teammates, and different coaching.
-WNBA Point Guard Sue Bird

45. Coming in every day and walking the walk. That is what you want to do as a leader.
-WNBA Star Maya Moore

43. When you work on getting better at something, don’t do it half speed.
-Ray Allen

42. Don’t give up. Don’t ever give up.
-Jim Valvano, Former NC State Head Coach

41. It’s not to hurt anyone, but basketball can be rough.
-Sue Wicks

40. We have unfinished business.
-Sabrin Ionescu

38. With the absence of pressure, it’s hard to do great things.
-UCONN head coach Geno Auriemma

36. Teams that play together beat those with superior players who play more as individuals.
-Jack Ramsay

35. Don’t act like you’re too good to use other ideas.
-Former NBA Coach Hubie Brown

34. The only important statistic is the final score.
-11-Time NBA Champion Bill Russell

32. For me, being tall was positive because I thought my mom was the most beautiful person ever.
-Former WNBA Star Lisa Leslie

31. Bottom line- if you want success of any kind; you have to be comfortable being uncomfortable.
-Tim Grover

30. I don’t need too much. Glamour and all that stuff don’t excite me. I am just glad to have the game of basketball in my life.
-NBA Superstar LeBron James

28. I’ve never lost a game. I just ran out of time.
-Michael Jordan

27. Everything is habit-forming, so make sure what you do is what you want to be doing.
-Former Lakers Legend Wilt Chamberlain

26. No matter what business you’re in, you can’t run in place or you’re going to be passed up by someone.
-Jim Valvano

25. You can’t concentrate on the misses. If you get good shots, you’ve got to take them. If you don’t, you hurt the team.
-WNBA Star Diana Taurasi

24. My goal is to win the next game one possession at a time. That’s it. I don’t have any other goals.
-NBA Coach Brad Stevens

23. Champions play as they practice. Create a consistency of excellence in all your habits.
-Mike Krzyzewski of Duke (“Coach K”)

21. I learn more from the WNBA. They know how to dribble, how to pivot, how to use the fake shot.
-Draymond Green

19. Bottom line, you’re either a risk taker or you’re not, and if you don’t take risks, you’ll never win big.
-Geno Auriemma

18. Love is the force that ignites the spirit and binds teams together.
-Former Bulls and Lakers Head Coach Phil Jackson

17. Coaches shouldn’t have to push you to work hard, you should push yourself to work hard because you want to be a great player.
-Former Indiana Head Coach Bob Knight

16. It’s not all about shooting. That’s such a small part of my game, but that’s what people focus on the most. I just try to do the little things.
-Dianna Taurasi

15. Be strong in body, clean in mind, lofty in ideals.
-James Naismith, Inventor of Basketball

14. It’s harder to stay on top than it is to climb. Continue to seek new goals.
-University of Tennessee legendary coach Pat Summitt

12. Whether it’s college or the NBA, it’s basketball, and the more you play the less you need to adjust.
-Dianna Taurasi

11. Push yourself again and again. Don’t give an inch until the final buzzer sounds.
-Former Celtics Legend Larry Bird

10. I think the good and the great are only separated by the willingness to sacrifice.
-NBA Hall of Famer Kareem Abdul-Jabbar

9. You cannot achieve unless you believe in yourself. You are more capable than you think.
-WNBA Star Elena Delle Donne

8. Everything negative- pressure, challenges- are all an opportunity for me to rise.
-The late great Kobe Bryant

7. Your passion and dedication can’t be some time, part-time, or spare time… It has to be All-Time.
-WNBA Star Breanna Stewart

6. You were born to be a player. You were meant to be here. This moment is yours.
-Former Team USA Hockey Coach Herb Brooks

4. Our goal is not to win. It’s to play together and play hard. Then, winning takes care of itself.
-Mike Krzyzewski (“Coach K”)

2. Empower the people around you, from the janitor to the athletic director. You do that by being sincere, caring about others, and then putting it into practice.
-Sue Gunter

1. Talent is God-given. Be humble. Fame is man-given. Be grateful. Conceit is self-given. Be careful.
-John Wooden