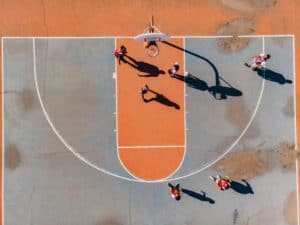 During my years of coaching youth basketball, I’ve learned the importance of teaching young players the basic fundamentals.

One of the basics I really enjoy teaching has to do with the baseline. If you can teach your players how to both drive and defend the baseline, they’ll be well on their way to becoming better basketball players.

You may have heard people talking about the “baseline” in basketball. You may have even heard players referring to it during a game. But what is the baseline? And why is it important in the game of basketball?

What is The Baseline in Basketball?

A basketball court has two baselines, one just beyond each basket. The baseline serves as an out of bounds line spanning the width of the court and may be referred to by some folks as the boundary line. Other people may call it the end line.

Basketball coaches often draw up a number of offensive strategies off of baseline screens and out-of-bounds plays. On the defensive end, coaches will usually encourage their defenders to limit baseline drives. The baseline is an important area of the court because so much strategy is based off of it.

How many times have you been watching an NBA game and heard a player say that he’s going to “drive the baseline on them”? You’ve probably also heard coaches scream from the bench, “Don’t let him go baseline!”

How Long is The Baseline?

On almost every basketball court, the baseline is 50 feet in length. There are a few exceptions to this rule but they are rare in occurrence. The baseline is always located exactly four feet past the backboard on each end of the court.

Rules of The Baseline

There are four lines on the basketball court that players cannot cross with the ball. There are two baselines and two sidelines. If the ball handler’s foot or any other part of his body touches any of these lines, the referee will make an out-of-bounds call. This results in a turnover and the ball will be given to the opposing team.

If a ball handler touches the baseline, the opposing team will be awarded possession and will get to inbound the ball from underneath the basket. Whichever player is inbounding the ball must be careful not to hit the backboard with his pass. If this happens, it results in a turnover.

The player only gets five seconds to inbound the ball to one of his teammates. Failing to do so will result in a five-second violation call from the ref, and possession will be awarded to the other team.

Importance of The Baseline in a Game: Offense

As we mentioned above, the baseline is an integral part of the game of basketball because so much strategy revolves around it. Here are some specific ways that the baseline comes into play on offense during any given basketball game.

Out of Bounds Plays

Several times during a game, a coach will draw up an out-of-bounds play. Most of the time, this will involve baseline screens or baseline cuts. This is the perfect opportunity to get one of your best shooters an open jumper.

The goal of a good out-of-bounds play is to get an easy layup off a screen or a wide-open three-point shot from the corner. All of the great offensive teams have plenty of out-of-bounds plays that they practice all the time.

A popular type of baseline cut is called the backdoor cut. This happens when a player without the ball fakes out his defender by heading in one direction but then sharply cuts in another direction. This can sometimes work against a zone defense but it works best when going against the man-to-man defense.

Here’s a great offensive strategy that can lead to some easy buckets. Teach your team how to set lots of baseline screens because this will frustrate the opposing defense to no end.

Have a player set a pick near the baseline. Once the pick is set, have another player sprint between the screen and the baseline. As long as the ball handler sees him come open in time, this should result in an easy lay-in.

Importance of The Baseline in a Game: Defense

Here’s a couple of ways the baseline comes into play on the defensive end of the court. Any sound defensive strategy always includes guarding the baseline.

So as you can see, the force baseline strategy can be one of high risk / high reward.

If you’re a big fan of using the zone defense, you may want your players to use the force middle strategy. As its name implies, this is where your defender forces the ball handler to the middle of the court instead of the sidelines. Defenders must still keep an eye on the baseline though.

The idea is that by forcing the ball handler to the middle, your zone defense can clog up the area around the rim and limit open shots. This strategy works best if you have a big center in the middle who is skilled at blocking shots.

Not sure whether to employ the force middle or force baseline strategy on defense? The best thing to do is split your team up and run a 5-on-5 scrimmage during practice to see which type of defense they are more comfortable running.