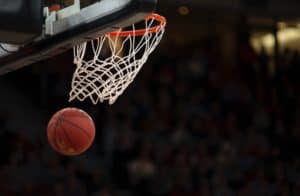 Have you ever watched a basketball game and noticed a player wearing an odd-looking mask? You may have wondered why the player was wearing the mask on the court.

Why Do Basketball Players Wear a Mask?

Basketball players wear masks to protect their faces from further injury during a game. Most of the time, the player has a broken nose or some other type of facial fracture and doesn’t want to risk re-injuring it. Basketball is a physical sport and elbows often go flying while scrambling for a rebound or a loose ball.

Many NBA players have talked about how uncomfortable and hot the face masks are but it’s the only way they can play in a game with any type of facial injury. A broken nose or any other type of face laceration can easily be reaggravated due to the violent nature of basketball. Players choose to wear these masks for precautionary reasons.

What is The Mask Made of?

Back in the day, NBA players didn’t have a plethora of different choices when they needed a face mask to protect an injury. The old-fashioned masks were one size fits all with bulky straps and resembled the scary-looking masks that hockey goalies used to wear. These days, NBA players are grateful that face shields can be custom fitted for greater comfort while on the court.

Protective face masks for athletes are made of a medical-grade polycarbonate that is shatterproof. These are much more comfortable for players and don’t limit their peripheral vision like the masks did in the 1970s and 80s. The new masks also come with some padding that protects the forehead from being rubbed raw.

Most Famous Players to Don The Mask

One of the most famous NBA players to ever don the mask was the late great Kobe Bryant.

Bryant suffered a broken nose and a concussion during the 2012 NBA All-Star Game when Dwayne Wade fouled him pretty hard. Never one to miss games, Bryant had a black mask custom made for him by Jeremy Murray, the same guy who made Rip Hamilton’s mask.

When you think about it, it was only fitting for the Black Mamba to wear a black mask! As most Lakers fans know, Bryant’s performance didn’t suffer one bit when he wore the mask. What a legend Kobe was!

CP3 had to wear a protective mask back in 2012 while with the Los Angeles Clippers.

Paul broke his nose against the San Antonio Spurs when Danny Green’s hand hit him in the face. Paul opted for a clear face mask with one strap and it didn’t affect his game one bit.

King James may seem invincible but even he is susceptible to the hard hits that NBA defenders dish out on a nightly basis. James got a broken nose when he was with the Miami Heat a few years ago.

The Heat were playing the Oklahoma City Thunder when James drove to the hoop for a vicious slam dunk on Serge Ibaka. Though the dunk was a thunderous success, Ibaka’s hand smacked James right in the nose and caused him to miss a game.

James made his return a few days later against the New York Knicks and wore a black carbon-fiber mask to protect his broken nose.

Good ol’ Beastbrook makes our mask list in grand fashion! Westbrook suffered a nasty broken cheekbone in 2015 while with the Thunder. He collided with Andre Roberson’s knee during a weird play against the Portland Trailblazers.

The crazy thing was this injury was from friendly fire, as Roberson and Westbrook were teammates. As you can tell from the above video, the mask didn’t keep Mr. Triple Double himself from filling up the stat sheet.

Rip Hamilton had the absolute worst luck when it came to broken noses.

The former Detroit Pistons star initially broke his nose in 2002 and then broke it TWICE more during the 2003-04 NBA season. Doctors advised Hamilton to wear a protective mask for the rest of his NBA career or else he’d have to have reconstructive surgery on his nose.

Hamilton did indeed wear the mask for the remainder of his career and that’s why he became known as “The Man Behind the Mask”. Some folks thought that the mask brought good luck to both Hamilton and the Pistons as they ended up winning the NBA championship that season.

Irving is one heck of a point guard, but he’s had an unfortunate history of facial injuries.

The first time Irving had to don the mask was in 2012 while with the Cleveland Cavaliers when he broke a bone in his face (OUCH!) while playing the Milwaukee Bucks. The gruesome injury didn’t slow Irving’s scoring ability as he put up 41 points during his first game with the black mask!

Five years later in 2017, Irving had to wear a mask again on the court after suffering a facial fracture while with the Boston Celtics. Irving collided with his teammate, Aron Baynes, and that’s what caused the injury.

A couple of years later in 2019, Irving once again had to wear a mask due to an injury. This injury was a facial contusion and it occurred while playing a pickup game. While wearing the mask during a preseason game, Irving was hit by Lakers guard Rajon Rondo and had to leave the game.

76ers center Joel Embiid had to wear a mask after an awful collision with teammate Markelle Fultz left him with a fractured eye socket. The injury was so severe that Embiid had to miss two playoff games.

Luckily for Sixers fans, Embiid was able to come back for Game 3 against the Heat and score 23 points. Isn’t it impressive that all of these NBA players on this list could still play at a high level in a face mask?