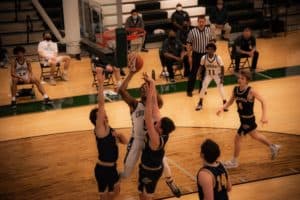 Hardcore sports fans know all about the holding call in football, but did you know that there is holding in the game of basketball as well?

Our goal with this article is to explain what holding is in basketball.

What is holding in basketball? We take a look at the definition, its examples, and how it’s usually called.

What is Holding in Basketball?

Whenever a basketball player uses his hands to limit an opposing player’s movement, the referee will blow the whistle and call holding. Holding is usually called on defenders but it can be called on offensive players on very rare occasions.

Another common holding foul occurs when an offensive player comes off a screen and is trying to spot up for an open jump shot. Lots of times the defensive player is late in getting into position, so he panics and grabs the arm of the offensive player to prevent an open look at the hoop.

Video Example of a Holding Foul:

In this video, you can clearly see why the official called a holding foul on the rebounder in red. The player with the red jersey hooks his arm around his opponent in the white jersey while they are both going up for a rebound. This foul was so blatant that the ref ended up calling a technical foul instead of a regular personal foul.

What is the Penalty for Holding?

Since holding is a type of personal foul, there are various penalties assessed depending on the situation. Here are a few examples:

What is the Referee Signal for Holding?

Interestingly enough, the referee signal for holding in basketball is similar to the football signal for holding. To call the holding foul, the ref blows the whistle, makes a fist with his right hand, then grabs his wrist with his left hand. The signal is done in the direction of the scorer’s table so that they know what type of foul has been called.

Other Personal Foul Types to Know

There are lots of other types of personal fouls in basketball. Here’s a quick list of some of them with a brief description.

A hand check is similar to holding but instead of grabbing the opposing player, the defending player sticks his hand out to impede the progress of the offensive player. This is a common personal foul.

This personal foul occurs when a defensive player smacks or slaps a player’s arm while he’s in the act of shooting. This type of foul can also be called when a defender goes for a steal but ends up hacking the offensive player unintentionally.

This happens when a defensive player inhibits the offensive player’s path to the basket. The defender may be trying to take a charge but doesn’t get his feet set.

This foul happens when an offensive player is trying to set a screen but doesn’t remain still and maintain a constant position through the process.

This is a foul that occurs during the rebounding process. Once a player has position, the other player cannot jump directly over his back to secure a rebound. This can be called on both offensive and defensive players.